Unbound Creations is an independent game studio focusing on crafting believable worlds, immersive gameplay, and strong narrative experience. It is founded and led by me, Jakub “Koobazaur” Kasztalski. Hi! I usualy work out to reach a full alpha build and then hire a team of talented artists to fill in the gaps of my terrible placeholder art.

I released my first title Postmortem: one must die in August 2013, a short political-narrative adventure playing an agent of death who must take one life from a cast of influential and ambitious characters in a industrial-revolution, conflict-torn country.

Getting Postmortem through Steam Greenlight and being featured in numerous bundles paved a modest but promising start for Unbound. The second title, Karaski… What Goes Up, followed in March 2016. This time, the players found themselves onboard a sabotaged airship, trying to uncover the culprit and avoid casting suspicion on themselves. Sneaking past guards, picking locks, bribing with booze and interrogating the passengers were the bread and butter of the open-ended mystery.

I started with the NES, which was called Pegasus in Poland for some reason. Megaman 4 and Fantastic Adventures of Dizzy were two of my favorite and most memorable experiences.

I always toyed with game and map editors – I spent more time in Starcraft’s editor or Half-Lif’e’s Hammer than the games themselves. One day, a Polish magazine I read published an article titled “Let’s write a game in Assembler” which caught my interest. I then picked up a weekly Teach Yourself Coding magazine that came with a free Delphi IDE CD and started learning with Objective Pascal. A year or two later, I approached one of my computer class teachers who was excited to start teaching me C++ after class. And the rest is history as they say!

Plenty by now! From Delphi, Borland and Turbo C back in the day, through Visual Studio and a proprietary engine at a gaming studio I worked for two years, all the way to building my own C++ engine with SFML and Boost for my first game and Unity or Phaser on my latest projects.

Probably marketing and publicity, building the interest and momentum. The inde scene has definitely blossomed in the past few years and while it is great with new tools and lower barrier of entry, it also makes breaking through the crowd much harder than it used to be. 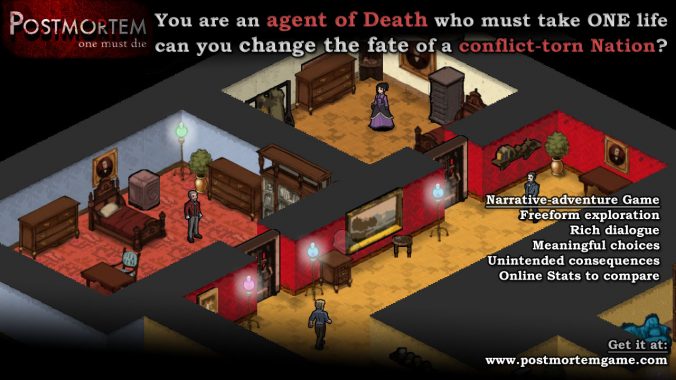 After my last two commercial titles, I am currently taking a break by making smaller, rapid-prototype browser games. My goal is to test out ideas, get some feedback, research the industry, see what players like, etc. I already finished two focusing more on just the mechanics, and working on the third one going back to my storytelling roots.

I published two commercial titles “Postmortem: one must die” and “KARASKI: What goes up…” as well as two free browser games CRAVEN and GATHER. Working on the third, Headliner, right now!

Don’t think so, although after the NES, I’ve always been a PC gamer. I did also have a GameBoy (Color and Advanced) which I enjoyed dearly. The first GameBoy Camera was particularly awesome for its time.

Probably Megaman 4 or Fantastic World of Dizzy. From contemporary indie picks, Broforce has been my favorite retro one.

Occasionally when I’m with friends. I’ve sunk many hours with Broforce and Gears of War coop in the past.

Hard to decide, definitely lots of stinkers over the past hehe. I think Final Fantasy 8 would be one of the most “disappointing” ones because such a well crafted and polished world and presentation gets sullied by the terribly tedious gameplay and nonsensical story.

I would be interested in in-depth articles about modern retro indie studios, how they came to be, what they went through, how they got to where they are today etc. There’s already plenty of retrospective for the legendary studios of the past, so a more contemporary indie scene look would be interesting.