Action, destruction and mayhem in a bottle, Overstep is a fast paced shooter which takes you from fight to fight in moments. Our fluid combat puts you in direct control, our weapon and armor customization lets you craft and sell your own creations to others, or take them from others as the spoils of war!

To put it simply, Overstep is:

To start with we have a career system that rewards you for your efforts, and prestige system which highlights you for not just kills but every action you take, leaving no moment of the game to get boring. Stunts chain together letting you pull off a dance of death as you charge through our levels destroying your targets as you flit from fight to fight.

If the fast paced stunts don’t suit you, we have corporations that reward long range destruction, close quarters brutality, explosive displays suitable for a Michael Bay film, disintegrating enemies with energy weapons and so much more. Overstep’s playstyles suits everyones preferences, where corporational sponsorships are offered and fitted for anyone.

Also, featuring a full weapon and armor building system, where players’ creations will be added to the general loot in the game, adding new content almost every match.

Overstep emphasizes fast, intense movement, acrobatic manoeuvres and well tuned combat. A wealth of game modes, Overstep is free from classes and allows you to play how you want. Destructible elements in the environment. Dynamic maps which allow for competitive and casual play and this is the tip of the iceberg for what we want to accomplish.

What is your first gaming experience?
It was Battletoads on a Famicom. And you made me want to play it, now.

What got you into programming games?
Actually, I don’t program. I have my background in video production and started from the artsy end of making games.
Luckily, there’s quite a lot of us in Gamecan now and programming is covered too! 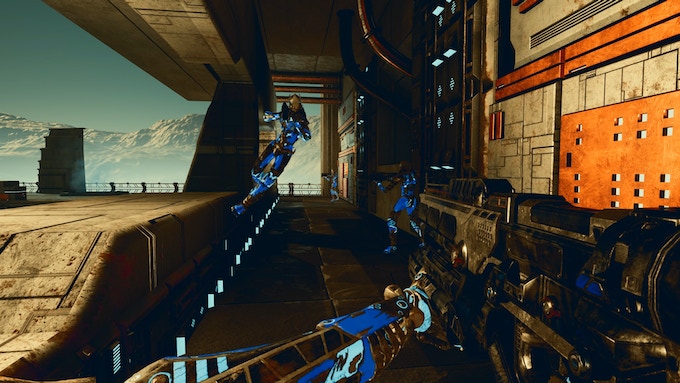 What development tools or coding did you use?
Overstep is developed on UE4.

What hurdles did you have making your current game?
The main challenge with developing an ambitious game like Overstep as a new indie studio, is development speed.
With limited resources, even your most unique game design ideas might be done by someone else if you’re too slow.
Hence, you need to reiterate some of the progress to stand out, again.

After the completion of the game what game will you make?
We plan to develop Overstep into something that will be around for at least ten years, if not more.

What other games have you made you made?
Personally, this is my first project. The other core team members have worked on projects like LittleBigPlanet3, Wolfteam, and others.

My favourite computer was my Amiga and console the Megadrive do you have a favourite?
As funny as it is, i was addicted to a Tamagotchi. Does that count?

What is your favourite retro game?
There are tons I enjoyed, but most probably Contra and TMNT on a Famicom were the ones I played the most.

Do you still game on the current consoles if so whats your favourite game?
We do have an original NES in the studio. We mostly do Super Mario speedruns on it when the PC’s need a break.

Whats the worst game you have ever played?
I actually can’t recall any. The ones that are really bad are so bad they’re entertaining.

Finally what game or feature would you like to see on Retrogamesmaster in the future?
Whatever deserves your attention!