Over the past six months or so, we’ve been working on simplifying the game to make it more playable on mobile devices.  The game is now more of a “runner” style game where you have basic tilt-controls for speed and the ability to jump and slide.
Also, we’ve added the concept of collecting memorabilia in order to rescue each year of the decade.  So as you play, you’ll be collecting cassettes, VHS tapes and video game cartridges from that year.  Once you’ve collected enough, you save that year and can move on to the next.

It’s been awhile since we’ve been in touch and I wanted to update everyone on some of the progress we’ve been making with the game so far.
We’ve put together a six level demo for iOS that we will be showing off this weekend at Artscape in Baltimore, MD.  If you have a chance, please stop by and say hi!

If you liked the video games we grew up with and the pop culture of that decade, you’ll love this game. Battle your favorite characters from the era as you run, jump, bounce and slide your way through the 1980s.

Super80sWorld has been in development for the past 18 months. The first five worlds are being released in our initial chapter:

What is your first gaming experience?
I remember going to arcades as a kid, but the first real memories I have was opening the Atari 2600 for Christmas in the early 80s.  My mother’s boyfriend bought the console “for her” and later told me that he was up playing it all night – only stopping when his Atari thumb went numb.
We had a lot of the classic 2600 games, but my personal favorite was probably Demon Attack.  I still think the graphics and animation look great today. 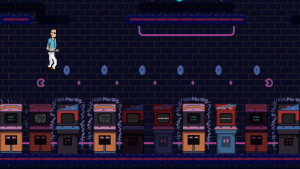 What got you into programming games?
I have been doing software development for about 15 years – mostly on the boring corporate side.  I was looking for a serious creative outlet.  My other passion is music.
That’s where the idea for Super 80s World came from.  I really wanted to create a game about my childhood – the whole thing – the iconic sights and sounds, the games, the music, and all the pop culture.  I wanted to relive the decade in multiple levels through an retro-style game. 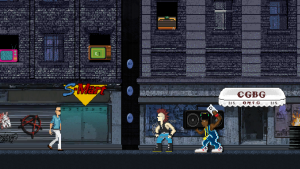 What development tools or coding did you use?
I’m using C# and Unity. 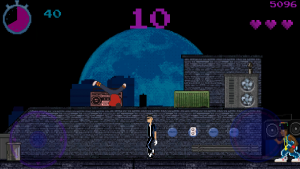 For me the art assets are by far the hardest part.  I had been trying my hand at painting for a couple of years before starting the game, but I’m by no means an artist.  I thought pixel art would be easier because of it’s simplicity, but in a lot of ways it’s not.  Animating characters is easily the most time consuming component of making the game.  Eventually I let go of the “I have to do it all myself” mentality and started working with an artist to add additional characters. 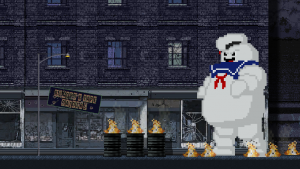 After the completion of the game what game will you make?
Super 80s World comes in two installments, 1980-84 and 1985-89, so that is next on the list.  After that I would really like to try something different.  This game has been a lot of work and I’d like to try a simpler casual strategy game – something a lot less demanding from an artistic standpoint.  Ultimately, I’d like to make a game that either blurs the lines of gaming and storytelling, education, music, or something like that. 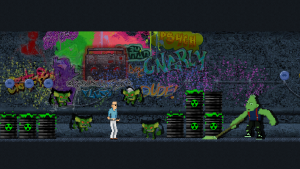 This is my first. I won’t count the “Turbo” style driving game I wrote using a really high level programming language (English) when I was 7 or 8. 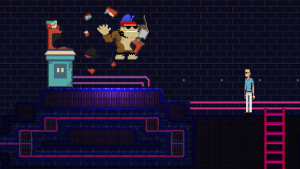 I went through a few computers as a kid before my mother finally settled on the Apple IIc.  It wasn’t a great gaming computer, but I did play countless hours of Wizardry on it (with expedition parties made up of members of Duran Duran and Simple Minds).
While it’s hard to name a favorite console, I’d have to say the Sega Genesis or the Colecovision.

I have an odd pick here – I don’t know if it’s my favorite as much as it is nostalgic for me.
There was a version of “Buck Rogers – Planet of Zoom” that was released for the Coleco Adam computer.  The game was on cassette and seemed to have endlessly changing scenery.  Later, when the Adam was returned to the store in favor of the Apple IIc, we got the Colecovision version of the game and I was sorely disappointed.  There were only like three stages on that version. 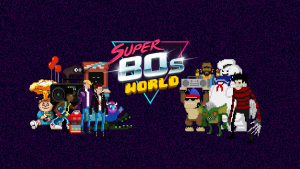 I have an Xbox at the moment and really liked “Middle-earth: Shadow of Mordor”.  I have been trying games across all the genres and some of the notables are “Ori and the Blind Forest” and “Life is Strange”.  The only genre I won’t touch is MMORPGs – a lesson learned after awaking from an 18 month Everquest hibernation in the early 2000s. 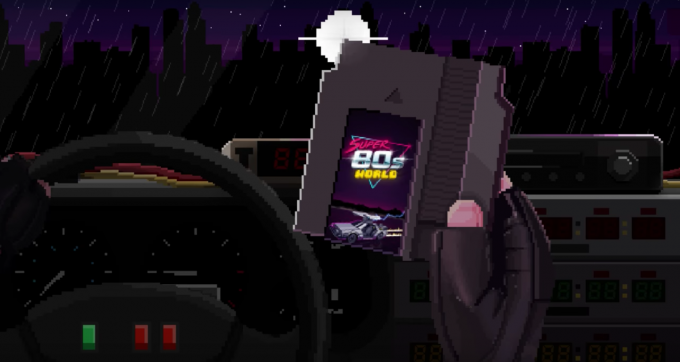 Anything that asks me to deposit more money to continue and isn’t coin operated. 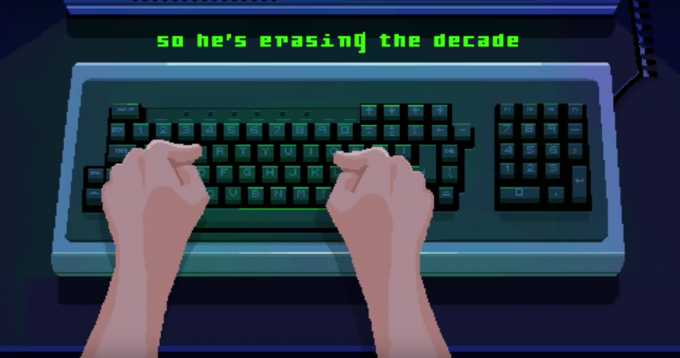 There are a couple of retro driving games that I think have a lot of potential:  Slipstream and Power Drive 2000.  I think they’d be a great fit. 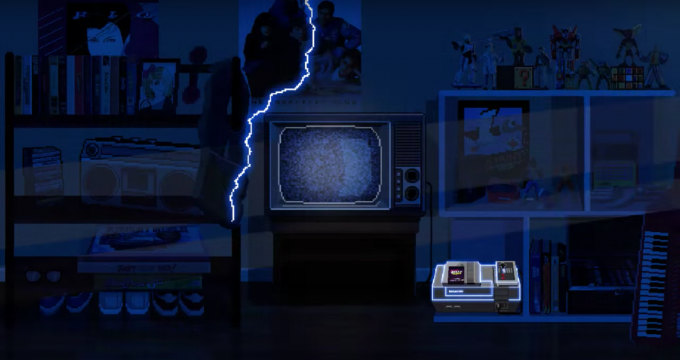