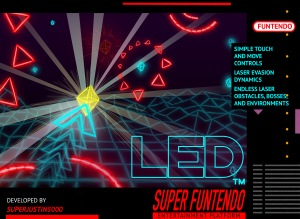 A beaming gauntlet of 100+ high-speed, skill-testing laser obstacles. Brilliantly rendered laser environments. Touch to beginning swiping and dashing your arrow in the direction indicated, and prepare to dodge lasers like never before.THIS GAME GETS DIFFICULT.

With a score multiplier that boosts every time you play, your potential for higher scores, more levels, and valuable collectables boosts with it.

How high can you take your multiplier and score?