The world setting is dark and mysterious, similar to early 20th century’s Earth, but with some… minor differences.

The story takes place in the city of Mavropolis, a squalid and dangerous city largely inspired by the stereotyped Los Angeles depicted in noir stories.

As we find out in the very beginning of the first game, Mr. Gilbert is a ‘Little Ancient’, the last remaining of a terrifying and powerful race, gifted with dark powers and mysterious skills.

Mr. Gilbert, despite his origins, likes humankind and lacks in ruthlessness; he likes Mavropolis in his own way and he tends to help people whenever he can.

In the first game Mr. Gilbert was hired from a mysterious woman to find a missing girl; very soon it became clear that the case was far more intricate than expected, involving dangerous cults, vengeful gangsters and horrifying abominations.

His next case won’t be less interesting…

– What inpired you to make the new game? 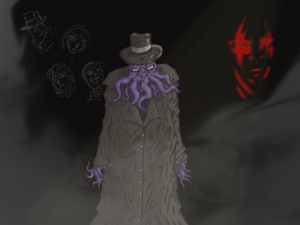 About the ‘A Matter of Caos’ series, we got inspiration from hard-boiled movies (above all, ‘The great sleep’ with Humphrey Bogart), Lovecraft books, golden age science fiction tales and, of course, from the GREAT graphic adventures from our youth, like ‘The secret of Monkey Island’ and ‘The day of the tentacle.’

The game engine we used was Unity 3D, using the C# language.

– What hurdles are you having making the game?

Our first issue is the lacking of a professional graphic artist, but we sorted out what we could using our skills.

– What other games have you made you made?

Until now, we developed the four episodes of ‘A Matter of Caos’; another graphic adventure, ‘A Tale of Caos: Prelude’, which 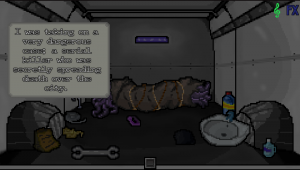 is, as the name suggests, the prologue for another series; ‘Eternal Pharaoh’, which was a sperimental idle game; ‘Necromancer’s Quest – Beta’, which is a still-on-building fantasy strategy game. You can find everything at this link: http://www.experagamestudio.it/games.html

– What is your first gaming experience?

We begun as small children: I begun with an old PC, using DOS and windows 3.1, playing puzzle and strategy games, while my partner begun with a commodore 16, playing text-based adventures.

– What got you into programming games?

It is my passion: my partner and I decided to undertake this path while we were still teenagers, but we started developing 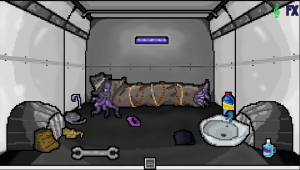 full time in January 2015: before of this I studied Computer Engineering at College and worked as software developer for few years.

– My favourite computer was my Amiga and console the Megadrive do you have a favourite?

My favorite gaming platform is the PC, but I started with an 8-bit Nintendo, living a long loves story with Super Mario Bros.

– What is your favourite retro game?

I don’t have a game I prefer over the others, but some of the games I’ll remember the most are ‘Super Mario Bros’ 1, 2 and 3, ‘Pushover’, ‘Contra’, ‘Super space invaders’ and all the old Lucasarts graphic adventures.

– Do you still game on the current consoles if so whats your favourite game?

– Whats the worst game you have ever played?

Right now I can’t recall a ‘worst’ game: when I don’t like a game enough to play it, I just leave it where it is.

– Finally what game or feature would you like to see on Retrogamesmaster in the future?

I’d like to read something about ‘One must fall 2097’, one of the best fighting video games ever!