Do you have what it takes to take the most radical bath on Earth?

Free for Fall is a fast paced, action arcade game about skydiving without a parachute while shooting mecha eskimos and rocket penguins. Easy to play and hard to master, you’ll need quick reflexes to rack up combos and complete each jump safely!

Upgrade your character through the 16 items available on the shop!
Collect 13 achievements to prove you’re the best aviator lumberjack around!
Score big combos in a fast paced gameplay!
Scream in anger after watching the Game Over screen for the [insert a frustrating number here] time!
Curse at the developer for making such a difficult game!
And much (not really) more!
Free for Fall is a freeware game, 100% free. Download and take it wherever you want!

Hello! Thanks a lot for the interview opportunity, I’m grateful for the chance to talk about what my projects and some more personal stuff. My name’s Caique Assis, I’m 19 years old and I live in Brazil.

My first gaming experience, if I remember correctly, was with the Super Nintendo. My older sister had one, so it was my first contact with games. Played some classics like Super Mario World, Top Gear, Alladin, Toy Story, etc.

I think some factors contributed to making me want to be a game developer, but a big push came with the programming classes at my old school, from 5th to 7th grade (11 – 13 years old). In the 5th grade, I got my first contact with sort of a programming logic, using the LOGO program to give instructions to the pointer and make it move around the screen and draw things. After that, in the 6th grade, I started using MIT Scratch – I think this is where I found out that I really liked creating game stuff, even if it was rather poorly done and simple stuff – I spent a lot of time messing around with it. I think that was the “defining point” that made me want to keep creating games.

I think the biggest problem I had while making Free for Fall was actually getting time to work on it – the project took way longer than I expected because I could only work on it on my free time from college, so progress was rather slow – if I was working full time on it, I’d have finished it much faster. Another problem I had and that a lot of people complained about was the fixed 640×640 resolution – that was a mistake on my part, but I couldn’t fix it without messing up the entire code workflow I had set before. Thing is, Free for Fall was just going to be a quick project I did while on vacation, but it grew a little bit bigger and I wanted to keep working on it – the problem is that this resolution and the screen space was organized in a very rushed way, because I didn’t really plan it out. Turned out that it affected me later, but I think people are able to enjoy the game even with this little problem – it doesn’t affect gameplay in any way.

Well, Free for Fall has been released around 1 month ago, both on Game Jolt (http://gamejolt.com/games/free-for-fall/220536) and itch.io (https://caiqueassis.itch.io/freeforfall), so I’ve been receiving mostly good feedback on it so far, it makes me very happy. I don’t exactly know what project will come next, but I’m toying around with some ideas in the meantime – it’s my last year on college, so it’ll end up getting in the way of my projects a little bit, but be sure to follow me on Facebook (fb.com/caiquesassis) and Twitter (@caiquesassis) to keep update about what’s going on and what I’m going to do next.

Well, I’ve made some other games before, but just didn’t release them to the public. Free for Fall was my first released project, mostly as a shout out to people saying something like, “hey, I exist, check my game out and if you liked it follow me around to get some other nice stuff in the future”. My first “completed” project was a casual platforming game called “Dr. Blob” – it was a game about an experiment going wrong where your character got transformed into a slime cube, and you had to reach the secret lab to get a potion to turn you back to normal. It was my final project on a programming course I took from 2013 to 2014. After that, I’ve made mostly small, crappy stuff just to test ideas out or get more experience using the engine, but nothing really big. I’ve made a 2014 Christmas game called “Killer Xmas”, about a drunk Santa that forgot to deliver one of the present boxes – this present box gets possessed with anger and sets out to raid Santa’s house and kill as many Christmas elfs as he can, also killing Santa in the process. I’ve made another one called Super Doom Dig, about mining the entrance to hell while protecting your outpost (maybe I’ll release it sometime in the future, just for fun). But yeah, most of those are really simple projects that never made it to the public, made in 3 days or so (with the expection of Dr. Blob). Even if Free for Fall isn’t that big, it was my biggest project so far – gotta start small, and go up from there, in my opinion.

I don’t really have a favorite computer or console – but I do have ones that made a bigger impact on me. Like I said before, the SNES was my first gaming experience, and I really love the collection of games it has. Another great console is the original Playstation. I think those consoles have lots of games that don’t get to us anymore, a lot of experimental, different stuff, and I really like those. I think that with the current state of the industry, AAA games have become too big to fail, so taking risks with experimental projects is a big no no for the developers. That’s where indies come in – there are lots of experimental stuff going on with smaller devs, and I love this aspect of indie gaming. But you talked about Amiga, if there’s one thing I love about it are those modular soundtracks from the demoscene – those rock. A computer that I got to see and interact with not long ago was the MSX – I found it lovely too. 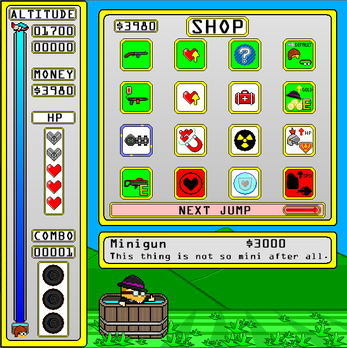 Depends on how much retro we’re talking about here! Well, if I were to consider the NES, I’d say the Megaman series, easily. It’s my favorite series up to this day, and the NES / SNES Megaman and Megaman X games are some of my favorites. But one of my favorites from the entire series is Megaman X4, for the PS1!

Currently, I don’t have a console – my last console was a PS1. Since then, I’ve only been gaming on the PC, but it was never that great of a PC to run releases and things like that. What I liked to do was playing MMO games, such as GunBound, Tibia, Maplestory, Adventure Quest Worlds (and most of Artix Entertainment games), Tanki Online, etc. Nowadays, I don’t get much time to play MMO’s, so I use my free time mostly to gamedev than to actually playing stuff.

The worst game? That’s a hard question…no game that I’ve played so far was so bad that I considered it to be the worst (that I remember), but I’ve played recently the Ghostbusters game on MSX – damn, that sucks so much. If you’ve watched AVGN episode on it, you’ll know what I’m talking about.

Well, it would be pretty nice if you guys covered the game “Bulletin” that my friend Cassiano Messias is developing – it’s an RPG game that’s coming along quite nicely. Be sure to check it out, here’s the link to the devlog (http://bulletingame.tumblr.com/).

Well, if anyone wants to get in touch with me, be it for gamedev stuff, or just randomly talk about any subject, send me a message over Facebook (fb.com/caiquesassis) or Twitter (@caiquesassis) – be sure to keep updated about my future projects too! Again, thanks a lot for the opportunity to be interviewed here at Retrogamesmaster, I really appreciate it! Bye everyone!