Hello and Welcome to Retro Gamesmaster, who come up with the Designs for the characters for Toejam and Earl?

I came up with the designs. Believe it or not I actually had a dream about the characters back around 1989 and I woke up and did a little napkin sketch of them. They ended up looking pretty much as I pictured them.

What inspired you to make the new Toejam and Earl?

The game I made before ToeJam and Earl was Starflight 1 and 2. These were big RPG space adventures that took a long time to build. I remember I wanted to make something light and silly and fun, and musical and cooperative. I wanted to have a good time making a game. I also loved the game Rogue when I was in college and I wanted to build a game that was like that. Combine that with my love of Aliens and Funk music and the idea of TJ & Earl was born.

Starflight 2 was published by Electronic Arts, and won the “Game of the Year” award from Computer Gaming World magazine. Was this your proudest moment in this industry?

No. That probably wasn’t my proudest moment. Awards are awesome and I love getting them on those rare occasions when it happens. Still nothing beats that feeling of walking into a store and seeing a game that you made on a store shelf for the very first time. It’s a bit like a first kiss or something. It’s a once in a lifetime thing and it’s very exciting. These days, with digital-only content so common, developers don’t always get that same charge. Still, I remember the feeling of believing it was never going to happen, then actually seeing it on the shelf. That was probably my proudest moment.What development tools or coding did you using during the development of the new game? 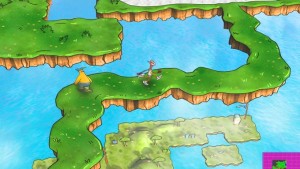 We are using Unity to build the new game, and an animation tool called Spine. Our other tools include Slack for inter-team communication, Drop Box, and Google Docs.

What hurdles are you having making Toejam and Earl

It’s always tough to make a game on a limited budget. You need to be very efficient and prioritize what’s most important because you know you won’t be able to get everything you want into the game. That’s what we’re doing. Trying to work smart. Also to save money we’re working with our 2 engineers remotely. Remote work always creates some extra challenges for a team. 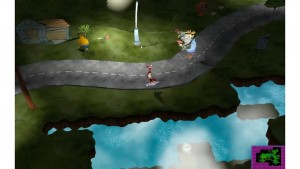 Most recently Doki Doki Universe, for PS3, PS4 and PSVita. Before that, Deko Deko Mail and Deko Deko Quiz for Facebook, Kung Fu Panda World for Dreamworks, Toejam and Earl 3 for Xbox, Orly’s Draw-A-Story, Starflight One and Two, Save the Dinos (an educational game about Dinosaurs). I also helped out on Spore, The Sims 2, Star Control 2, and a few other games. I created a TV series for the Disney Channel called Choo Choo Soul and wrote the songs for that. I created a few games that never got released, and was creative director for a few dot-com companies (Electric Planet and UBUBU). 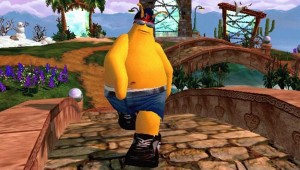 Probably Rogue on the mainframe computers at UCSD. This was back in around 1980.

I got my undergraduate degree in Bio-Linguistics with the intention of doing communication research with Marine mammals. I didn’t intend to make games as a career. In fact when I was in college computer and video games didn’t really exist. When I discovered what was possible I got so excited, I thought I’d enjoy doing that for a year or two before going to grad school. I never went back.

My favorite computer was my Amiga & console the Megadrive do you have a favorite?

I can’t say I really have a favorite computer or gaming platform. Its the content that matters to me. I do have fond memories of the Amiga but I think it was more the era than the computer itself. That was an exciting time in the industry when it seemed like anything was possible.

It depends on how far back you want me to go. If I go allllll the way back, then it’s probably ‘Space Wars’. It’s that old vector graphics game with the sun with gravity in the middle. I totally loved that game. This was back when video games were only in stand up arcade cabinets in bowling alleys,and game centers, before they were in people’s homes. That game is was Star Control was fashioned after, by the way..

I do play a lot of games, but usually only for a short time each to try them out and see what new ideas, if any they may offer. I usually get discouraged after playing for awhile. I rarely finish games. In terms of games I’ve put the most hours into, in the past year or two that would be World of Tanks, and before that Age of Empires. I think my all time favorite game is probably ICO, and Journey is up there too. I used to love Dead or Alive 2, Soul Caliber, and Gran Turismo. I have yet to find my perfect game. I think I’m probably going to have to build it. 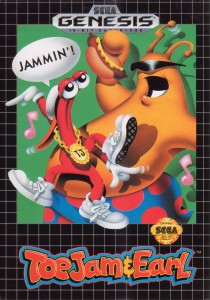 I’ve played a lot of games that I find tedious or boring, but that’s not the worst thing a game can be. I’ve played games that glorify bloody or grotesque violence or even cruelty and these games I consider destructive and unhealthy. I’d rather not name any of these games and just leave it at that. Game developers have a responsibility. We touch a lot of people’s lives, especially young people. Violence isn’t bad in and of itself. That’s part of life and it can teach us good lessons or help us understand the past, which was often brutal. I happen to love martial arts for example. It’s the message that people take away from the fantasies that we build for them that matters. It’s sort of like the difference between a martial arts master who teaches you the beauty and grace behind the forms, and help you grow from them, or one who just teaches you how to kill people. It’s all in the intent, and in the “how” of what we do.

Well your theme is Retro Games, so I’d love to see articles about trends in the gaming industry. Where games have been and where they are and where they are going. It’s great to enjoy good memories of the past, and to build our fan knowledge about retro games. Still, I find it most interesting when we think in the big picture about games. Back in the early days no one knew what games were and we tried lots of different things, making it up as we went along. These days, with the indie movement it feels a bit like the old days of games. What can we learn from the retro games? What did they offer that modern games don’t, and how can we use those insights to make better games today? That’s the kind of stuff I’d love to read about.

Thank you for you time we look forward to playing the finished game.