Our quest begins simply, we’re developers who mine for new mechanics, stories and universal fun for our videogames. Some of the greatest milestones in gaming come from creative modding and happy accidents. Team Fortress, Counter Strike, Minecraft, Plants vs Zombies and MOBAs… All of these happened thanks to small teams having fun. We boil diverse skills, kind personalities, and shrewd business wit in our cauldron to produce quality magic. This blend is used in product strategy, game mechanics design and engineering, music composition, storytelling, and economics. We are children of the first gaming and digital generation who love to explore frontiers while honoring past legends. We pursue new possibilities in interactive narratives while we remember the joys of our favorite titles. Above all, we poke dragons and solve problems without fear, finding our way out of dungeons and exploiting the weaknesses of big obstacles. From casual to serious, from single-player to MMO, we’ve grinded our way through 25 years of gaming history. And we’re excited to contribute to this artform’s future. We collaborate from Frankfurt am Main, Hong Kong, L.A. and NYC

Lots of aspects in video games, like narrative, still offer untapped potential. At Konspiracy Games, we believe the inherent character of games as a medium that fosters interactive narratives –not telling pre-scripted stories, but creating them through gameplay– is one of those promising qualities.

Blossom & Decay is a browser-based, sandbox MMO ARPG that is set at the edge of a dying realm. It brings action combat together with crafting and survival mechanics, in an open world where players are able to develop their unique story experience.

The openness of Blossom & Decay’s world fosters narrative by motivating players to act. The terrain is empty, without buildings at the beginning. All structures and cities that fill the world get created by players. Every building has a player-related history.

Players have to defend and conquer the land. Enemies are weak and resources sparse near the coast, where players arrive as settlers. As they move toward the realms of darkness, players face a constant stream of enemies and high-quality resources are abundant. Players must fight to slow or even stop enemies, figuring out ways to defend their lands.

Instead of leveling, the player’s experience, timing and handling of their skills defines their combat prowess. The power-curve between items is flat, so a group of skilled players can always defeat even the best equipped solo player.

Progress in Blossom & Decay is based on learning and social interaction rather than grinding and time-invest.

We didn’t want players to endlessly have to grind monsters for random drops (except monster parts ;P). So we made Blossom & Decay a real sandbox simulation where players fight to defend their cities, develop secured territories and replenish resources. This will require farming & crafting as in titles like Minecraft, with an added support layer of asynchronous play which we describe a little further.

We dropped the concept of NPC traders all together, so the economy is fully player-driven. All goods are crafted, transported and sold by players. Similarly, quests are contracts between players, instead of repetitive NPC tasks.
Players rely on collaboration for safety and efficiency. As others try to raid their possessions, group work becomes essential. Justice is defined and enforced by player-clans to keep people from wrongdoing, setting things like bounties on players who robbed them.

The game mechanics require cooperation and open the door to competition and player conflicts. This allows for treason, espionage, feuds and alliances like in EVE online. A player can exploit market changes to make money trading. Another player might decide to rob them on their travels. Others may then be contracted by the trader to bring that thief to justice.

We wanted players to play at their own pace without falling behind those able to make huge time-investments. Focus has been put into mechanics that benefit different playstyles, balance between factions, and reduction of required playtime. And as we mentioned earlier, player avatars can enter asynchronous play.
When players go offline, they don’t de-spawn. Instead, game AI executes instructions set by the player. Say you want to seed, harvest and water your crops. Say you want to open up a shop. Say you want to guard a buddy’s house. Live action gameplay as in WoW, combined with long term strategic gameplay as in Clash of Clans.

We are currently optimizing Blossom & Decay’s engine and backend for the upcoming combat demo launch. We will need testers (as MMOGs as well as Sandboxes require tons of balancing!).
We have a lot more to cover in future posts but we want to share an idea that we hope to take one step further towards the full potential these beautiful interactive environments can offer.

MASSIVELY-MULTIPLAYER
Battles with hundreds of other players, no instances, no loading between maps

ASYNCHRONOUS PLAY
Your character can build, defend and craft while you are offline

EMERGENT NARRATIVE
No NPC quests, the games stories and events are all driven by players

PLAY IN BROWSER, ON ALL DEVICES, WITH ALL CONTROLS
Gamepad, mouse, touch-screen on phones, tablets and all computers.

What is your first gaming experience?
Its a good question, I think it must have been Tetris, Pacman, Blockout or Moonlanding around the age of 6.
My father had a computer that ran DOS and had a monochrome screen where I played for hours.

What got you into programming games?
It was an Episode of Peanuts I watched as a kid! The gang goes to computer camp and builds a game. Being 9 years old and having taught myself a bit of Basic I thought: “OK. I will do this as well one day”.

What kind of game are you working on right now ?
Our current game – Blossom & Decay – is a Sandbox MMO ARPG.
It’s an open world and player-driven economy, where the story is not scripted but instead developed by the players and emerging from their interactions and different motivations.

What development tools or coding did you use?
We are working with JavaScript and WebGL in the front-end and NodeJS as well as ReDis in the back-end. We use NetBeans and GitHub and the back-end runs on Google servers. 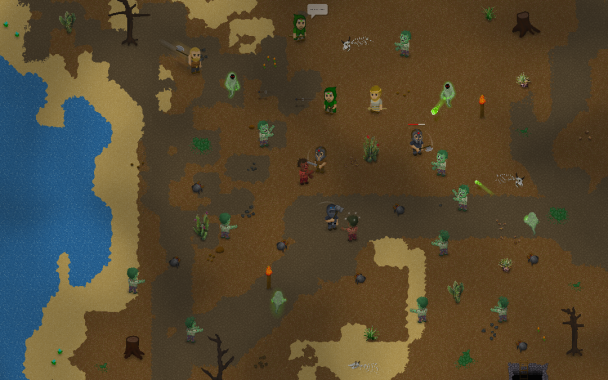 What hurdles did you have making your current game?
Finding a group of people as well as some money on the side took me 8 years. In that time the ideas developed and evolved, but really starting was the hard part.
Now that we have mastered the technological problems (Server-Client are fast, reliable and powerful so that action combat is no problem, even with over 2000 players in one screen,) the main challenge is balancing this huge MMO Sandbox.

After the completion of the game what game will you make?
If we succeed and find an audience with this game, it will mean years of work. We will evolve the system together with the community and probably go through multiple cycles of adaptation, extension and balancing. The game is supposed to grow with its players.

What other games have you made?
We are coming from different parts of the software industry but haven’t built a game yet.
All of us have long experience in developing software as well as in playing games. I am excited to see how the combat demo that we will release soon will be received and we will optimize and iterate a lot based on the feedback we receive. 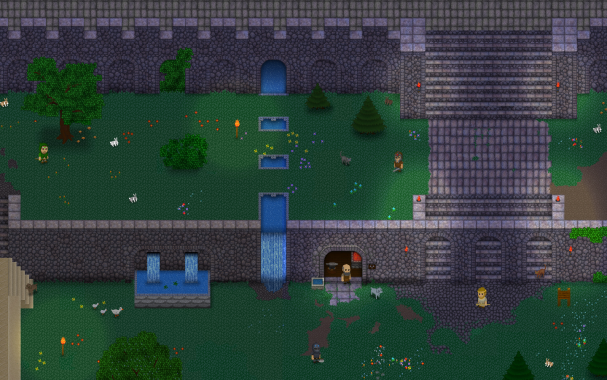 My favourite computer was my Amiga and console the Megadrive do you have a favourite?
I also think I have the warmest memories about sitting in front of a friends Amiga after school and playing Dune 2 or BMH, a German Soccer Manager.
My favorite console is the SNES, because a friend got it from his cousin who worked at Nintendo way before it was released in Germany. We sat there during the entire summer holiday playing one game after the other, translating the english texts with a dictionary.
It’s possible Zelda is more responsible for my proper english than school.

What is your favourite retro game?
That’s a really hard question. But the first game that really impressed me was “The game of Robot”, which could almost be called an open world sandbox game, with a complexity I haven’t seen long after.
https://www.google.de/search?q=game+of+robot&tbm=isch&tbo=u&source=univ&sa=X&ved=0ahUKEwi5-e_RqczOAhURlxQKHccfDHUQsAQIOA&biw=1821&bih=1103
Apart from that clearly: Zelda – A Link to the Past.

Do you still game on the current consoles if so what’s your favourite game?
During the times before Steam, when the myth of “PC gaming is dying,” spooked around, I developed a bit of a console antipathy. One reason was I was playing shooters, strategy games and MMORPGs, all genres that still don’t work for me on a gamepad. The other reason was, that I was aware of modding and grassroots development, and back then as well as today, the PC is at the forefront of innovation in game design. It enables players and indie developers to create better things than on any other platform. The PC is a work environment, and its not a closed system like phones, tablet or consoles, so we really need to preserve and support PC gaming for the sake of all games. But many of the older consoles still stand in my living room.
But generally I am a Playstation guy and once a while I borrow a console to keep up on the latest God of War titles. I like the driving gameplay combined with the completely over the top story and don’t even mind the QTE. 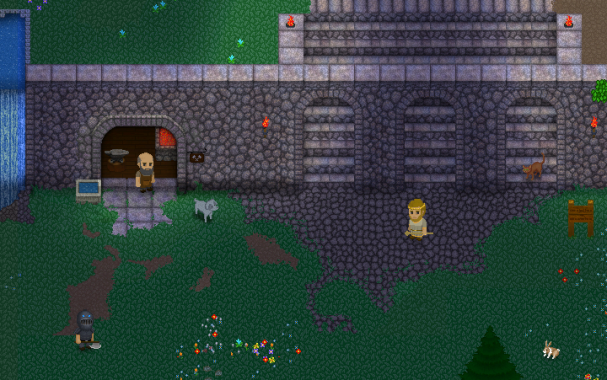 What’s the worst game you have ever played?
Well, I am too young for the E.T. game, so I was spared that disappointment.
The game that annoyed me the most relative to its success probably was Farmville. For me it was a blunt and uncreative Harvest Moon ripoff with only parts taken out and with some horrible waiting-mechanics integrated that were there to make you pay money.
With Assassins Creed and Watchdogs, Ubisoft also ranks high on my disappointment-list. I might have played worse games, but the hype was what made the actual experience so bad.

Finally what game or feature would you like to see on Retrogamesmaster in the future?
If you look for indie retro-games I would really recommend to ask Stephan Hövelbrinks (https://twitter.com/talecrafter) for an interview. What he does looks extremely tasty and I would love to hear more about it. 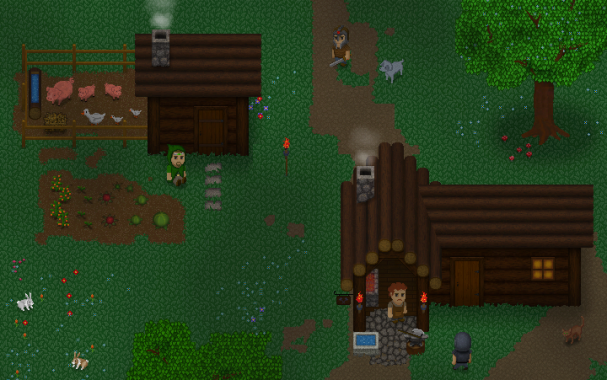