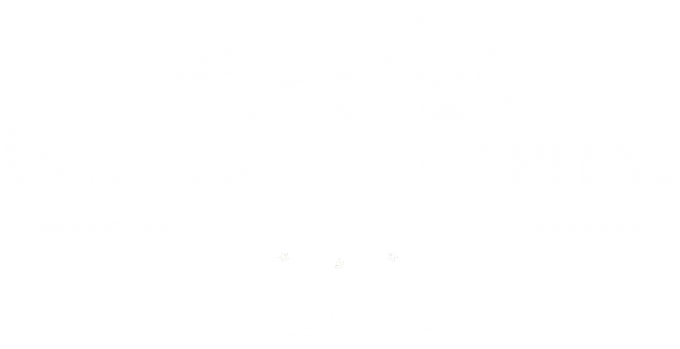 Das Humankapital is a small indie game studio located in Linz, Austria. Its core crew consists of David and Roland, both of which are passionate gamers and game designers. The first endeavor was started in 2003 with the development of “Atomic Butcher”. Approximately 10 years later, David and Roland teamed up for another joint venture, the sequel “Atomic Butcher: Homo Metabolicus”. This time, a company was founded.

About “Das Humankapital”“Das Humankapital” is a small indie game studio. We create games in our free time, mostly ones that we’d enjoy ourselves. When we think they are ready, we release them. We love what we do. Always have. Always will.

Atomic ButcherDavid and Roland went to school together from their early teens on. One day, they discovered their shared interest in computer games – and especially, in creating them! In a time of static HTML pages and 56k modems, they tried to figure out how to code games with the little information that was available. Achievements like unlocking VGA mode with its mind-boggling 256 colors brought tears of joy to their eyes. The years passed, and many more or less successful attempts at making games and sharing them with their friends followed. One fateful day in 2004 the two of them decided to hole up at David’s place for 3 days and 3 nights and just program like crazy. The results of this coding spree became the basic fundamentals of a simple platformer – still nameless at the time. This project soon took on a life on its own and grew and grew … the name “Atomic Butcher” was revealed to the developers by the muses of game design in a moment of divine inspiration, and one thing led to another. The year 2004 was also the year in wich “Humankapital” (human capital) was elected as the most disgusting “non-word” by the Frankfurt Goethe-University. For reasons somewhat lost in time, this amused David and Roland greatly and prompted them to name their two-man indie collective after it. At the end of 2004, they finally released their first joint-venture as freeware to the world: a platformer somewhere between Postal, Fallout, and Abuse. With over 500.000 downloads over the years, and several nice reviews the creators thought the game was well-received and considered it a success. Over the course of the next 10 years, plans to finally make a proper sequel were cooked up and died down again, usually in the form of unfinished protoypes. Until 2013, that was… almost a decade after the Butcher’s first inception, the stars finally aligned right and development for “Atomic Butcher: Homo Metabolicus” began – once again, self-funded and with basically no resources except a healthy readiness for self-exploitation!

David: My parents played quite a lot of board games with me and my siblings, so I guess that would be my first gaming experience. As far as digital games are concerned, I’d name winter and summer games by Accolade, and a bunch of other such games that fit on a 3.5″ floppy disk — some even came on the large 5.25″ floppy disk. Lucky me was my father a little bit into computers and programming himself, so I had a device to play around on very early on in the early 90s, when PCs were very expensive and not very common.

Roland: This would be playing on the Amiga 500 with my brother. Probably Turrican or R-Type, I cannot really remember which one was first, but those two are definitely the candidates that I’d name. Yeah, and I also liked Winter Games, those were cool . 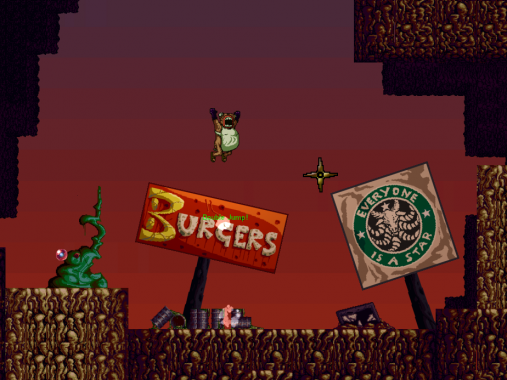 David: Mostly the urge to create and design something from the ground up. I started with designing board and card games, using colored paper, pencils, scissors and glue; that kind of stuff little kids love to play around with. However, computers always had a certain fascination, with their ability to make things move on their own, so I switched to digital games.

Roland: For me it was similar to David. It was more the narrative of games that got me hooked, since I also played a lot of pen and paper role-playing games like Dungeons & Dragons with my brother and his friends. Writing on the computer seemed to be the logical step, which had so many more capabilities to create a narrative experience the player could explore at his own pace; much like reading a good book, only better. 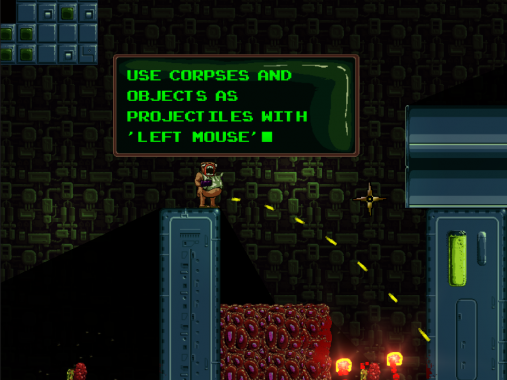 David: I would say that the tools that we did use in the course of our lives until now is that of a classic 90s self-taught game programming nerd. We both started with QBasic which was shipped with MS DOS, until we hit a technical barrier and moved on to Pascal, C, Assembler, each of which giving us a little bit more control over what we wanted to do — plotting pixels and reacting to mouse input was quite cumbersome in the ages where the internet was not as readily available as it is nowadays. Lots of things we learned from books that we bought from our limited pocket money, or went to the university’s library in the next bigger city to read up on stuff there.

Roland: For our current title “Atomic Butcher: Homo Metabolicus” we used an existing game engine, Unity, along with C#. We already did our time writing our own engines, so even though it may sound a bit clichè, we’d say “Been there, done that.” While it’s interesting to learn about all the technical stuff how to plot pixels onto the screen and how to access the keyboard and the mouse, it’s no longer the kind of problems we want to solve. We did not want to write another engine, but create a game; in hindsight, this was a good choice, and we’d do it again this way. 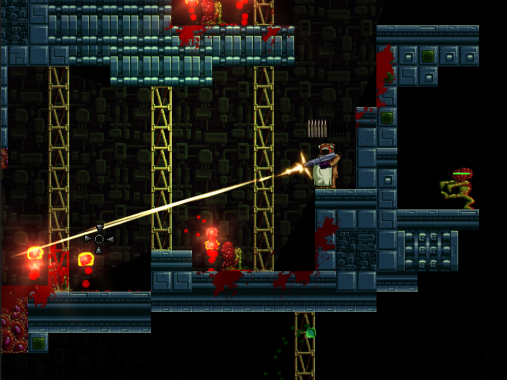 David: Nothing extraordinary, now that we are both seasoned developers. We had a few fights with Unity, the gaming engine that we are using, but those were mostly my own fault and due to the fact that I was not too familiar with the technology. It’s been a while since I last did some shader programming, which took a little time to get into again, but I think I managed well enough. At first we were planning to outsource the graphics to an artist, but did not manage to acquire one, so we had to do it ourselves. Roland is very gifted and took the time to learn pixel art — I think he did a good job, the end result pretty much looks and feels like we wanted it in the first place . 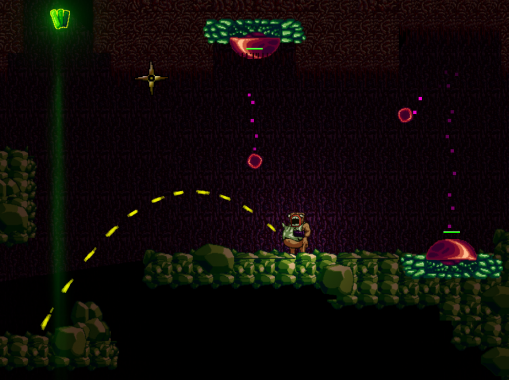 Roland: A short break, I guess, as we were developing on that title for more than three years “on the side”, which means in addition to our day jobs and petty social distractions like friends and girlfriends. As far as the next game is concerned, we have not talked about it yet; but since we still like each other, I think chances are high we are going to team up once again. 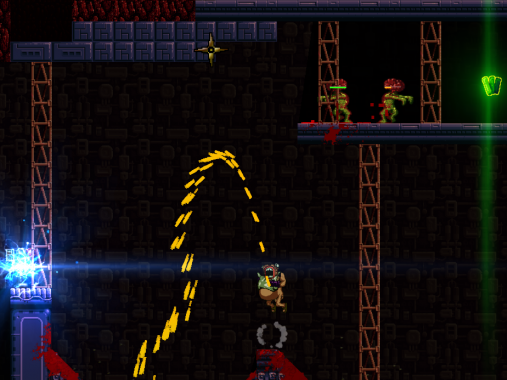 Roland: “Atomic Butcher: Homo Metabolicus” is actually the sequel to our first publically released game “Atomic Butcher”. We released it in 2004 as freeware. You can still download it for free at http://www.dashumankapital.net/. Other than that, we both did a bunch of games that we shared solely with our friends; unfortunately, they are mostly lost. Back then, we were kids after all, and still had to learn the hard way the value of proper backups.

David: Right. As teenagers we went to the same school, and it was quickly apparent that we shared an interest here. After all, spending the leisure time reading books about maths and programming, and generally creating video games because we liked it was not very common. Back then, being a teenage programmer was not something that one would be particularly proud of. We were commonly regarded as the nerds by most people, and this was not in a good way; this is something I think has changed in the past few years, when it became more and more hip or “in” to be the indie video game developer. Not that we mind, we did our thing anyway. 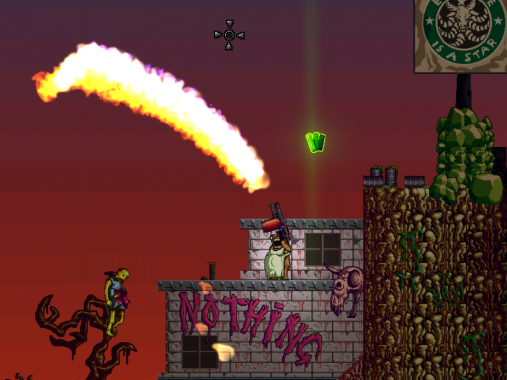 Roland: I fancied my brother’s Amiga 500, as well as the NES.
David: I am more the PC kinda guy. My first console ever was an XBox 360. 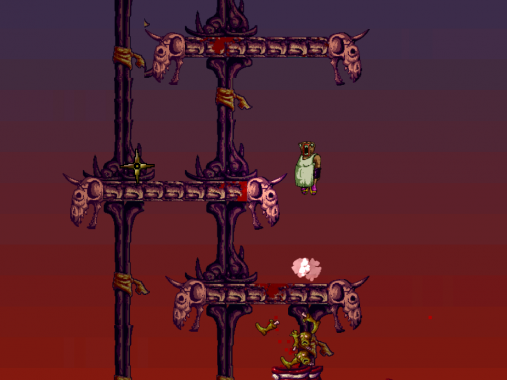 We both loved the entire Ultima series, with Ultima VII being our absolute favorite. The density of the world was astonishing and very inspiring. As far as our technical idols are concerned, we were impressed by Ultima Underworld, System Shock, Doom, and Quake. 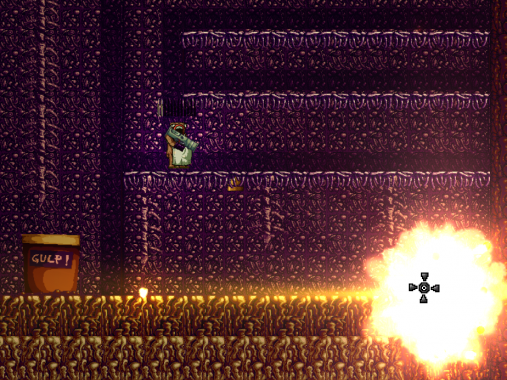 Right now, unfortunately, no — creating a game takes a lot of time. We like to play Resident Evil 4 on the PS2, and currently are fighting our way through Doom 2016 as well as id’s original Doom games with the Brutal Doom mod; this we can really recommend. But those are games that are casual to us, in the sense that we hook up for a quick multiplayer session that lasts between 10 and 30 minutes, and then we get back to developing.

Really, I cannot remember. We ditched games we didn’t like quite early, so the “bad games” faded into the forgotten. The good ones we remember all the better .