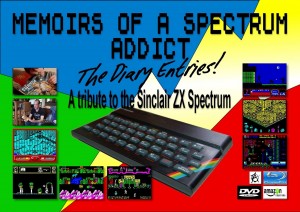 Memoirs of a Spectrum Addict is a unique tribute to the Sinclair ZX Spectrum, a full-length documentary feature film made by author and filmmaker Andy Remic, which takes a detailed look at the Speccy’s history, developers, games and fans. This is a not-for-profit film. Please consider pre-ordering, because the more pre-orders we get, the more we can actually spend on pre- and post-production.

IT WAS A cold, bleak December morning as I queued on a dual carriageway in Essex. Rain drummed the windscreen, and wipers thumped adding to the rhythm of my headache, a headache instigated by a bad night’s sleep, in turn brought about by a decidedly dangerous spicy Indian curry in Lavenham. But this was all good, because it helped allay my nerves – nerves at the my forthcoming interview with the mighty Steve Turner!
For the uninitiated, Steve Turner is the genius programmer who wrote such classic Spectrum games as Avalon, Dragontorc of Avalon, Ranarama, Quazatron, Magnetron…. a co-founder of Graftgold with fellow developer Andrew Braybrook, for me (a proper fanboy) this was never going to be the easiest interview in which to keep my cool. 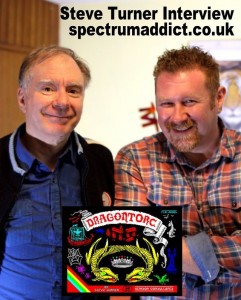 The door was answered by the amiable Steve, who quickly showed myself and the camera crew into his living room. He had coffee waiting, and we chatted as we drank – but this was a problem! Because everything we were talking about I wanted for the film, from writing games for Andrew Hewson at Hewson Consultants, to setting up Graftgold, and the events which transpired when Graftgold was taken over… “No no no!” I screamed internally, “I need this for the film!”
After coffee, I went about setting up the camera equipment, lights, sorting out the audio recorders, as Steve still chatted away and I realised (with some modest horror) that I’d been mispronouncing Quazatron for a quarter of a century. I pronounced it “kwoz-atron” whereas it should be “kwaze-atron” – and Steve’s quizzical look at my pronunciation was a slice of fried gold.

Anyway, diving into the interview proper, Steve was a wealth of anecdotes, from coding assembler by hand on paper whilst watching the TV back in the early days, through games he played, the testing of his own games, technical challenges of coding on the Spectrum, his proudest coding (and indeed, hardware) achievements, piracy and its effects on Graftgold – then into the extended interviews focusing on Avalon, the inspirations for the game, technical challenges, Andrew Hewson’s first thoughts, how the game was received by the press, and what Steve would change now if he ever got the chance. And Quazatron, code-borrowing from Andrew, how the path algorithms for the robots were coded, choice of monochrome versus colour, and pixel- and block-scrolling…. my head was spinning, I was in heaven, Steve was a true gent and a joy to interview – knowledgeable, enthusiastic, and would you like to know what he thinks about coding a new game on the Spectrum? What he’d like to write as a follow-up to? Ach, you’ll have to wait for the film, sadly. 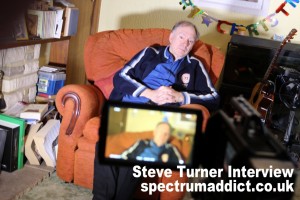 As we concluded the (very long, fascinating) interview, we got to talking about music. My composer, Digital Front had already created a modern rendition of the Quazatron soundtrack and was currently working on Avalon. Steve whipped out his guitar and played an acoustic set for us, ending with a beautiful and haunting rendition of Avalon. Thankfully, I kept the cameras rolling, and so this will make it into the film. What a way to end the interview! And what a joy for this Spectrum fanboy.
Cheers, Mr Steve Turner!