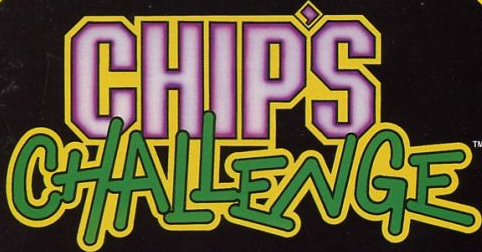 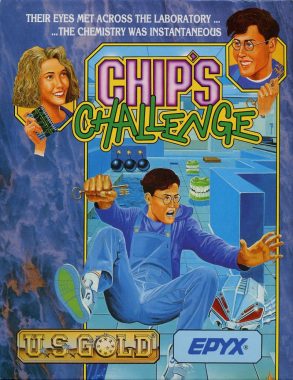 DESCRIPTION
Chips Challenge is a puzzle game, originally from the Atari Lynx. 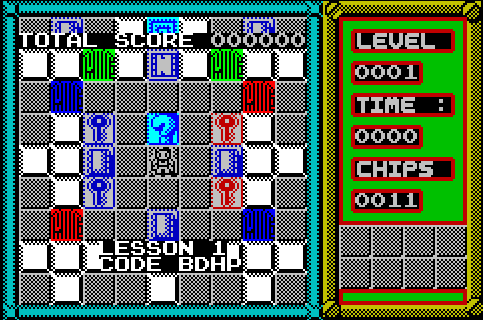 Chip would do anything for Melinda the Mental Marvel. More than
anything because he wanted to join Melinda’s exclusive computer
club – the Bit Busters. So you can imagine how Chip felt when
Melinda sat down next to him in the school cafeteria and offered
him membership… on one condition.

Take control of Chip as he does some heavy interfacing with a few
interesting puzzles. Melinda will monitor your progress as you
enter and work your way through 144 levels of challenging
maze-like paths and puzzles. Once you accept the challenge,
there’s no escape. Monsters, traps and the ticking of the clock
all conspire to delete you before a level is completed.

You must ram blocks of soil together to create bridges over water
traps, or use them as buffers against cherry bombs. Invisible
partitions will impede your progress. Coloured keys will open
doors that kead to other keys that will open still more doors!
To make it through, you must keep puzzle sequences stored in your
memory.

Most levels have a specific number of chips that you must collect
before you can progress to the next level. Sometimes you must
snatch those chips from under the very noses of deadly bugs who
are just aching to take a byte out of you!

Well Chip, are you still up for the challenge? You can’t get that
Bit-Busters T-shirt out of your system, can you? OK buddy, make
tracks for level one of Chip’s Challenge! 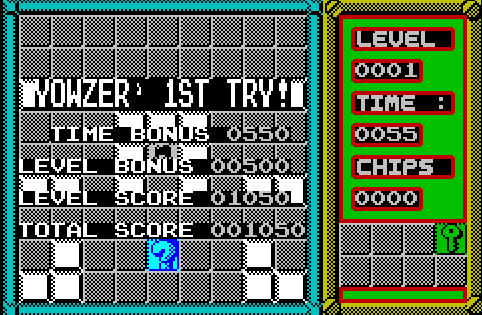 Instructions: You have to collect a set amount of chips on every
level,not necessarily all of them. In your path are several
puzzle parts:

TRAPS must be disarmed before you can pass through them. There
are various sorts of traps. For example, some hold you prisoner
until your time runs out, while others destroy you as soon as
you step on them. You can disarm traps with strategic placement
of dirt blocks.

FORCE FLOOR TRAPS [Conveyor belts] propel you with lightning
speed from one area to another without allowing you to stop.
Sometimes you can use this force to propel you to a desired
location, however most of the time you will need to collect a
magnet to neutralise the effect.

FIRE TRAPS are impassible bonfires laid out to block your
progress. Use a fire shield to walk through fire traps

WATER TRAPS can be crossed in two ways. Either build a bridge of
dirt blocks or have a water shield in your inventory.

ICE TRAPS are slippery obstacles that make you slide right past
your goal. Cleats are required to be able to walk over ice traps.

MONSTERS want to destroy you and will show no mercy. One touch
from a monster and you’ll cash in your chips.

TANKS block the way through crucial paths in some levels. Tanks
are always linked to trip buttons, so the way around them is to
activate the correct trip button so they move out of your way.

THIEVES. Touching a thief wipes your inventory of all items. Make
sure you use the tools you need to collect microchips before
trying to pass a thief.

TELEPORT SQUARES move you to another location in the level. Some
squares teleport you in the direction you were facing when you
stepped on them. Others teleport you in random directions.
Beware! if you step on the only teleport square that is
accessible, you will be trapped.

TOGGLE BLOCKS are outlined with broken coloured lines. These
blocks can be solid or transparent. When the toggle block is
solid, you cannot pass through. These blocks are linked to trip
buttons. When you activate a trip button, the toggle blocks
linked to it will switch to the other stated (Solid or
transparent)

MICROCHIP SOCKETS are special objects found on most levels. You
must pass through a microchip socket to reach the Exit Square,
but only after you have collected the required number of
microchips for that level.

BLUE BLOCKS can be real walls or just an illusion. To figure out
which a particular block is, try to pass through it. If it is an
illusion, it will disappear.

KEYS open doors. Pick them up to add them to your inventory. To
use a key, walk up to a door of the same colour as the key. Most
keys will disappear from your inventory.

DOORS are opened by keys of the same colour. Once the coloured
door is open it stays open.

MICROCHIPS enable you to pass each level’s microchip socet. Most
levels have a required number of microchips you must collect
before you can pass through the microchip socket to the Exit
Square.

EXIT SQUARES are flashing squares found on every level. Step on
an exit square to proceed to the next level. Exit squares are
usually blocked by microchip sockets.

DIRT BLOCKS can be linked together to form bridges over water,
pushed against a bomb to explode it harmlessly, or used as blocks
against monsters, deadly lightning balls, and other moving
obstacles. You can only move one brown dirt block at a time. If
you place a dirt block to make a bridge over water, you must
stamp down the dirt to turn it into a regular floor square. To
do this, step on the block after pushing it into the water.
NOTE: You may find things hidden under some dirt blocks.
Sometimes the things you find are valuable, like microchips.
However you may find that a block is covering something
unpleasant, such as a fire trap.

MAGNETS neutralize [sic] the effect of force floor traps. With
a magnet in the inventory, you can walk over a force floor
normally.

FIRE SHIELDS neutralize fire. With a fire shield in the
inventory, you can walk through fire [But not fireballs].

WATER SHIELDS allow you to walk on water.

CLEATS allow you to travel over ice traps without slipping.

NOTE: Magnets, fire shields, water shields and cleats stay in
inventory. They do not disappear after they are used.

Chips Challenge was more famous on the Atari Lynx but I was not rich enough to own one one of them.  So it was a joy when this was released on the Spectrum.

For me this was one of the best puzzle games id played certainly on the spectrum.

Nice clear colour graphics and puzzle learning curve is just about right give this game a go if you like puzzle game.