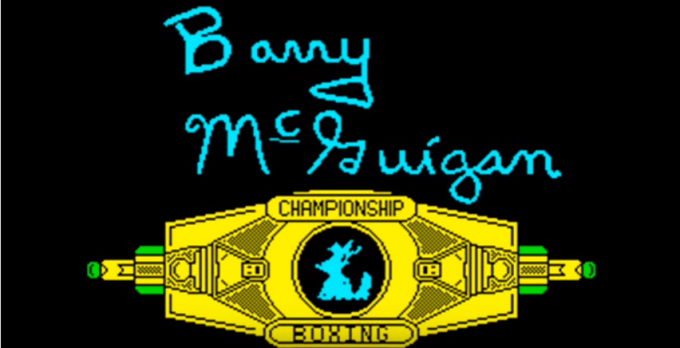 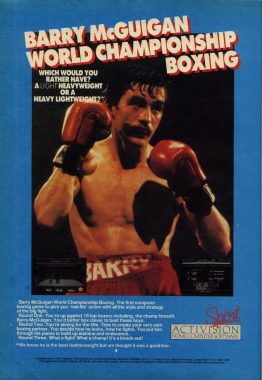 Overview
You have been invited to participate in the challenge of BOXING. Raw, iron-
twisting strength is definately an asset. But for a shot at the title you’ll
need more than that… like strategy, finesse, lightning fast reflexes and
a mental toughness that most games are afraid to require. Increadibly
realistic animation, including a full arsenal of purchases, defensive moves
and footworks. So grab your gloves and come out fighting!

Congratulations. You’ve been invited to participate in the challenge of Barry
McGuigan’s World Championship Boxing. Raw, iron-twisting strength is
definitely an asset, but for a shot at the title you’ll need more than
that… like strategy, finesse, lightning fast reflexes and a mental
toughness that most games are afraid to require. Before you grab your gloves
please read this official programme. We’ll explain some of the finer points
and strategies of the game, teach you to become an effective puncher, and
introduce you to the World Championship circuit. 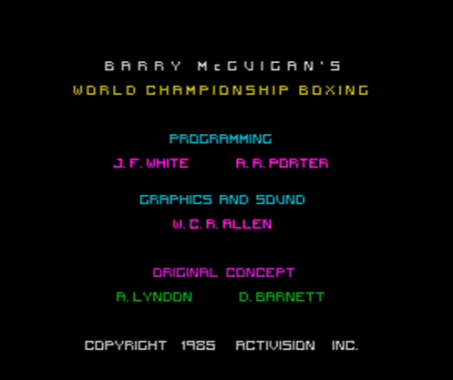 Truly an historic day in computer sports. You’re probably quite anxious for
a shot at Barry and the title, but so are the other boxers on the circuit.
Here are some names to keep an eye on as you move up the ranks:
Sonny Robinson; the number one contender is a flamboyant fighter with a
dangerous left jab. He’s been training heavily for a rematch with McGuigan,
so he won’t be easy to beat.
Thunder Thompson; a newcomer to the circuit. He picked up an easy gold in the
Star Rank Games and joined the pro ranks with the medal still swinging around
his neck. A tough fighter to hurt.
Lucky Lou Lyndon; another newcomer to the circuit who has tremendous strength
that most of Lucky Lou’s opponents are still nursing their bruises from their
fight with him.
Supporters say he has flawless style and execution.
Flash Fenwick; an extremely quick fighter. Likes to put the “magic” on his
opponents. (Definite proof that the hand is quicker than the eye.)
Bashin’ Bill Snow; a powerful fighter with many years of experience in the
ring. Weakens other fighters with his increadible body blows.
BoomBoom Barnett; another powerhouse with a wicked right cross. BoomBoom is
an imaginative fighter who often outwits better boxers – quite unusual for a
powerhouse. 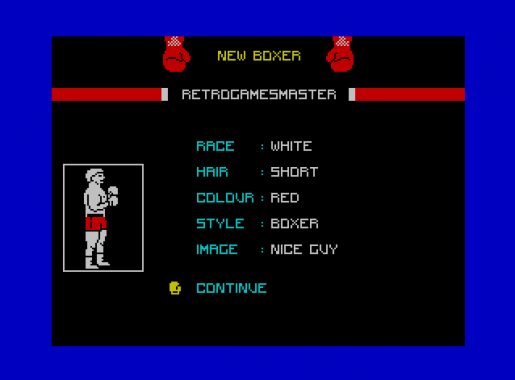 Dancer; likes to “stick and move”. Rarely goes inside.
Boxer; sometimes moves inside, but prefers to keep his distance. An excellent
style if you like to flurry.
Mixed; very unpredictable. Hard for your opponents to “read”.
Slugger; no-nonsense style. Doesn’t tire quite as easy because he doesn’t do
much dancing. Goes inside often.
Bulldog; likes to slug it out toe-to-toe. Can sometimes trap a dancer against
the ropes. 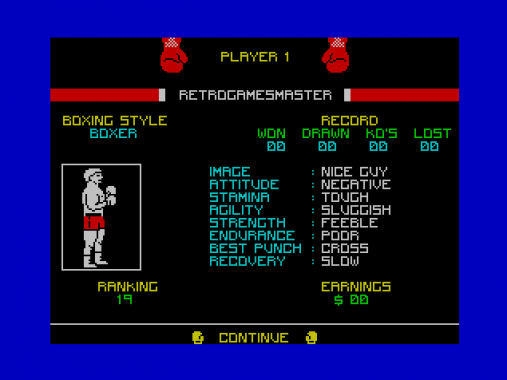 Ringside
As in real boxing, your goal in Barry McGuigan’s World Championship Boxing is
to outscore or knock out your opponent in 10 or 12 round bouts. Each round
is 3 “minutes” in length. 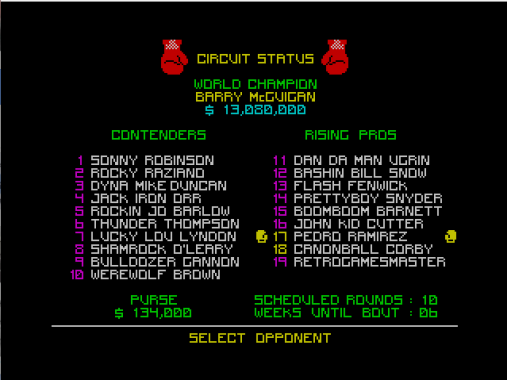 Training camp is the most important part of the game next to actually being
in the ring. But before you train your fighter, study his attributes * and
notice how they can affect the outcome of each fight: 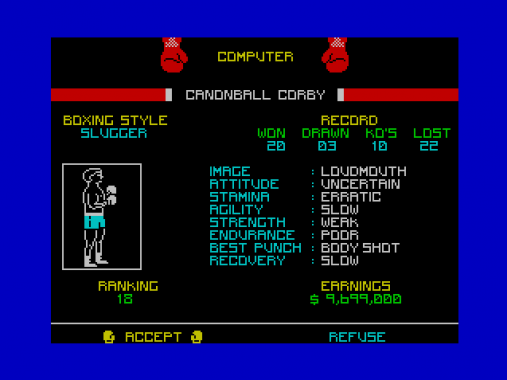 * weak * erratic * average * tough * mighty
Endurance is the key to knockdowns. When it’s less than ten a knockdown will
occur within the next few punches. Because of the TRIPLE KNOCKDOWN RULE, if
your fighter winds up kissin’ canvas three times in the same round the
fight is over. (That’s called a TECHNICAL KNOCKOUT). Endurance goes down
when you are hit and when you miss! The scoreboard above the ring constantly
displays both fighter’s endurance registers. Watch these numbers carefully!
Endurance is indicated in the corners of the fight screen. 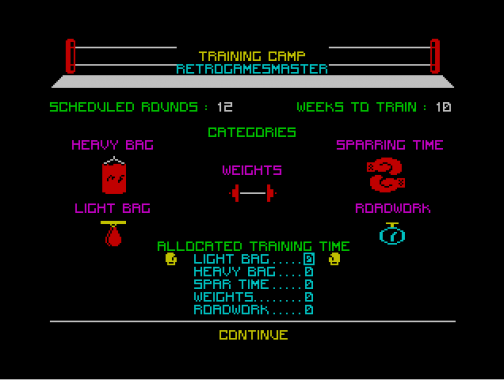 * sluggish * slow * average * quick * lightning
The “toughness” register. Stamina may be thought of as a persentage. When a
boxer rests between rounds he gets back a percentage of the endurance he lost
in the previous round. Also, when a boxer is knocked down (endurance is less
than ten) his chances of getting back up are related to his stamina. If his
stamina is very high he will always get up but the lower it gets the better
chance he will be knocked out. Stamina goes down every time you are hit. 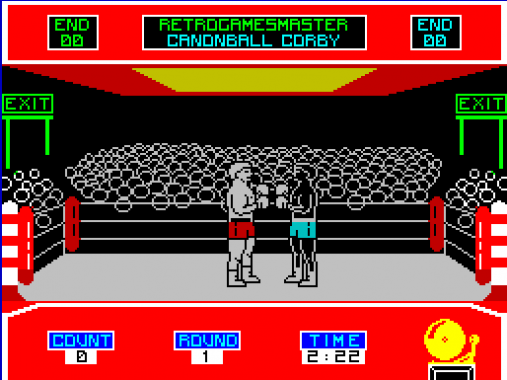 * feeble * weak * average * strong * awesome
This register reflects your fighter’s power. A strong fighter’s punches will
do more damage. Every punch you throw – hit or miss – will drain your
strength register. 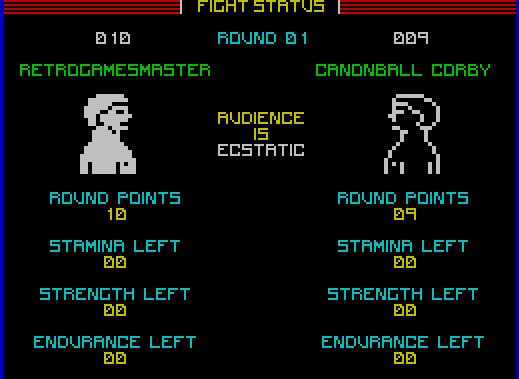 * poor * average * good * massive
Agility is the key to your boxer’s punching speed. It too goes down with
every punch.
You’ve chosen an opponen, studied his strengths and weaknesses, planned your
strategy and now you have from 6-12 weeks to train for the big fight. There
are five areas in which you can allocate your time. You don’t have to spread
your time between the five areas. You can capitalize on one of your strengths
or compensate for one of your weaknesses. The choice is up to you! Here are
the five training areas and the effect they have on your status registers:

Road work; hitting the road has a tremendous impact on your endurance and
helps build strength and agility.

Wights; pumping iron is a strength builder. A few weeks of hard work and
you’ll be amazed.

Spar Time; practice in the ring will build all your registers but is
especially good at boosting your stamina.

Heavy Bag; punching the heavy bag is great for your strength but it’s also
helpful in “toning” your stamina and endurance.

To train your boxer simply move the glove to an area and press FIRE. Every
time you push the button another week will be allocated to that area. You can
move to any area and devote up to 9 weeks as long as you don’t exceed the
total number of weeks left until the fight. When you are finished move the
glove to CONTINUE and press FIRE. 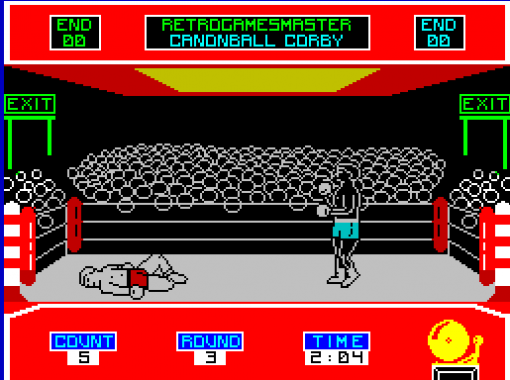 Hook; the hook is slightly more damaging than the jab. It too is a quick
punch and is good for scoring points without tiring the boxer unnessarily.

Uppercut; the uppercut is an explosive punch from the INSIDE, It’s moderately
tiring and is a good knockout punch.

Cross; the cross is an explosive punch INSIDE and OUTSIDE. Crosses hit with
tremendous impact but are also extremely tiring. Use them cautiously.
Head shots – Jab, Hook, Uppercut and Cross – will always connect unless
blocked by coverup or because punches were not delivered from the right
range.

Body Shots; the body punch is a power punch. It drains an opponent’s
endurance and his strength. Like a cross, it too is very tiring. 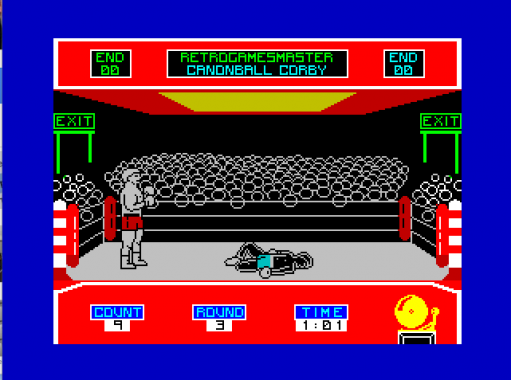 Coverup; the coverup wards off all blows to the head. Your boxer WILL NOT
move while he is covering up, so if you want to move you’ll have to
release the joystick/keys and go to AUTO-DEFENCE.

Auto-Defence; leaving the joystick/keys in the neutral position will cause
your fighter to go to AUTO-DEFENCE. This is an effective defence against the
body shot. 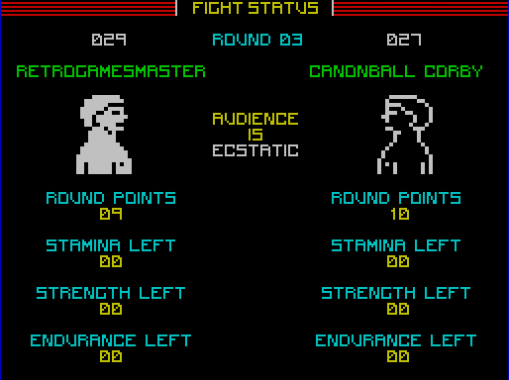 1. Barry McGuigan’s World Championship Boxing is unique in that it focuses
on the art of the sport. Style, training and strategy are emphasized over
slugging ability.
2. Grab your gloves and take on 19 different circuit boxers, including the
Champion himself. Barry McGuigan… personalized artificial intelligence
makes each boxer uncannily lifelike.
3. Create your own boxer… choose race, style, look and image.
4. Take your boxer to training camp to fine-tune his skills… light bag,
heavy bag, road work, and more.
5. Increadibly realistic animation, includes a full arsenal of punches,
defensive moves and footwork.
6. Realistic ringside atmosphere… from the cheering crowd to the “thud”
of a solid body shot. Plus, a specially composed musical score that captures
the excitement of the game. 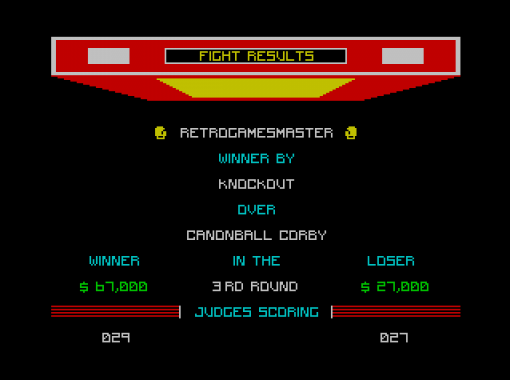 We wanted this section of the manual to cover most of the strategic
possibilities in the game. We soon realized that it would take another
manual twice as long as this one to do that! Just like in real boxing, there
isn’t a “best way” to win. Your overall fight strategy has to be based on
your opponent, and it’s sometimes necessary to change strategies mid-bout.
Here are some things to keep in mind.

1. So far we’ve discovered two good “overall” strategies. You can try to win
the fight by hurting your opponent to the point of knockout. Or you can throw
lots of jabs and hooks (which aren’t tiring) and try to win by points. This
strategy requires that you have an excellent defence or you won’t make it to
the end of the fight.

2. Notice the way your opponents throw punches. Some fighters throw more when
they’re INSIDE. Some hit more when they are OUTSIDE. You should be able to
use this pattern to your best advantage.

3. A good defensive strategy, if you are INSIDE and in COVERUP is to push
FIRE. Your boxer will throw an uppercut and go right back to COVERUP.

4. Use the jab as a distance gauge. If you’re sure the fighters are in range
but aren’t sure that they are INSIDE throw a jab. If if misses (and it
wasn’t blocked) you need to push FIRE because the boxers are definately
INSIDE.

5. If you see your opponent has a lot of STAMINA you’ll have to hit him with
crosses and body shots to bring it down.

6. Remember, points are scored every time you hit the other boxer. Often, the
boxer who punches more hits more; so he scores more points. But he may also
miss more and even get knocked out, so be careful because a KNOCKOUT
always wins over points. 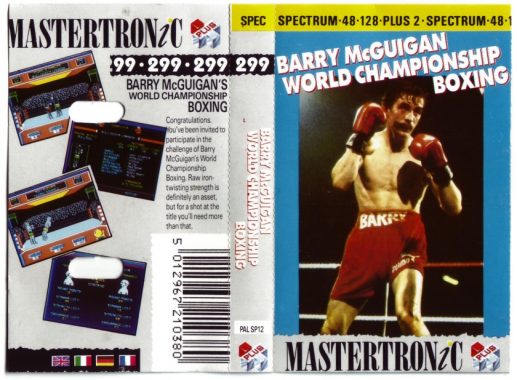 I have always been a fan of Boxing through the years have more of a fondness of boxing from the 80’s and 90’s.

And have played quite a few boxing games in my time most good like Punch Out, Evander Holyfield’s, Ready to Rumble to the ugly Centre Ring Boxing on the Saturn!

So where would a place Barry McGuigan Boxing for it is my favourite boxing game of all time as it offers more indepth experience than most boxing games.

It is a management/arcade boxer; you start by nameing your Boxer and the creating the look, race, style and your image.

Then you go onto the the Circuit choosing your next oppenent; after you then go to training centre and select what type of traing you will do.

Will you focus on weights or road work that is your choice to make; The way you train will decide you destiny to hopefully one day being champion.

The actual boxing part of the game is sinple but fun; I spent so much time on this classic and if you give it a try im sure you will be right hooked (Joke intended sorry).