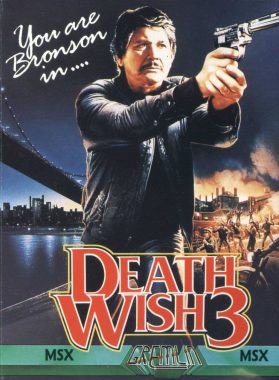 For far too long, ruthless and merciless gangs have terrorised the streets.
Muggings and robberies have become commonplace and the police seem powerless
against the underworld. So, when the Chief of Police turns a blind eye, you
take over where the law left off…

You play CHARLES BRONSON’S leading role of street vigilante Paul Kersey, New
York’s own unique brand of Justice Fighter, and you are out to rid the city
of the punks and creeps who infest the streets.

Having received a distress call from an old friend, you venture to New York,
scouring the streets and buildings for the villains and the vermin,
eliminating them as you go. The police help out where they can, but your
driving force is the belief that the safety of decent New York citizens is in
your hands.

It’s not going to be easy – locals can get caught up in the action, but
luckily medics are on hand to tend to the wounded. Remember too that the cops
are on your side – shoot too many by mistake and you will find them far less
than friendly. Punks and creeps are easily identified, but the notorious gang
leaders, lolling around behind their desks are your prime targets. 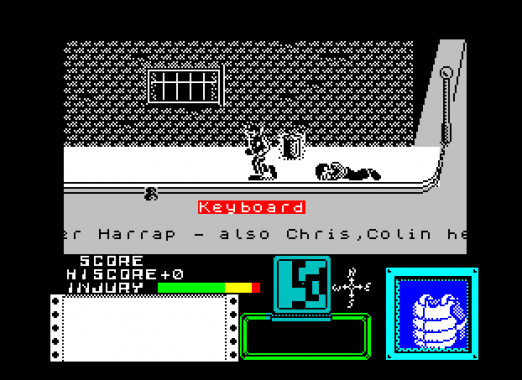 Playing the Game:
DEATHWISH III has a realistic three-dimensional scenario. You may turn around
to look in any direction – the view you have is always geographically
correct, the streets and buildings forming a logical map. A compass in the
lower part of the screen will help you find your way around the city and
shows your direction of view – NORTH, SOUTH, EAST or WEST. 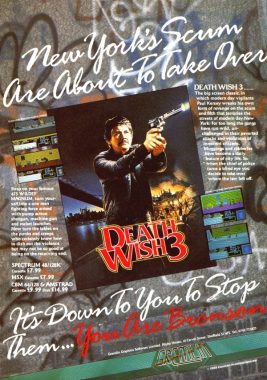 Your location in the city is shown on the map alongside your compass, and is
always orientated in the direction of view. The map can also be toggled to
inform you of either the whereabouts of gang leaders or the location of
replacement weapons. 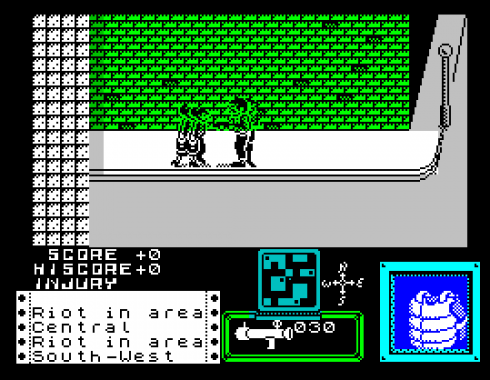 You have four types of weapon at your disposal: your famous 475 WILDEY
MAGNUM, a pump-action shot-gun, a machine gun and a rocket launcher. Each
weapon has its own distinctive devastating effect, but ammunition is not
limitless. The weapon currently being used and its remaining ammunition is
shown at the bottom of the screen. When a weapon runs out of ammunition, it
is automatically discarded until another can be found. Kersey will inform you
if he has no weapon! 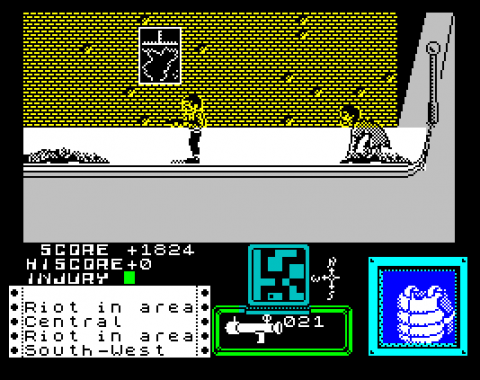 The lower part of the screen also contains all the information you’ll need in
your fight to free the streets of New York. A printout from the police HQ
computer warns you of where riots are breaking out. Gangs from the outlying
regions will fight for control of the city centre, so you can be sure that
this is the most dangerous place to be. The condition of your bulletproof
vest and your state of health are shown. Too many holes or a direct hit to
the heart is fatal. 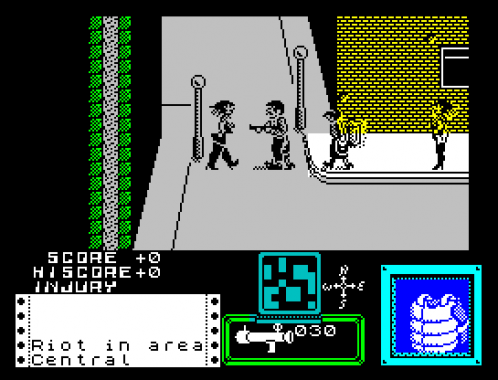 The top part of the screen contains all the action. Buildings may be entered
and searched for extra weapons or gang leaders. You may approach windows and
look through them, a gunsight will appear and allow you to fire into the
street outside. Higher points are given for shooting from windows, but watch
out for creeps attacking from behind!!

When this game was released I was too young to watch the Death Wish movies starring Charles Bronson.  But the cover looked appealing and a game with guns also.

You play street vigilante Paul Kersey and your aim is to clear the streets the criminal scum of New York City.

You start with a bazooka which is a great weapon to start with as you can imagine.   I really enjoyed this game and the weapons in the game.

I have to confess the most enjoyable bit for me in the game was using an Uzi and you could shoot this old lady who seemed to not fall over until you stop shooting sick I know.

But this was as close to Grand Theft Auto as it got back then and a very enjoyable experience.