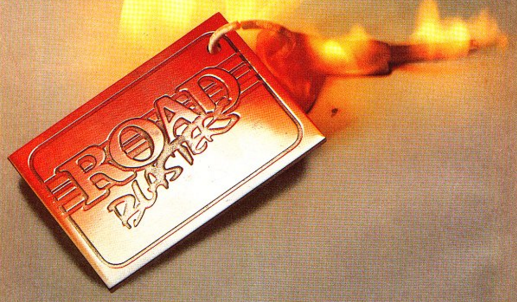 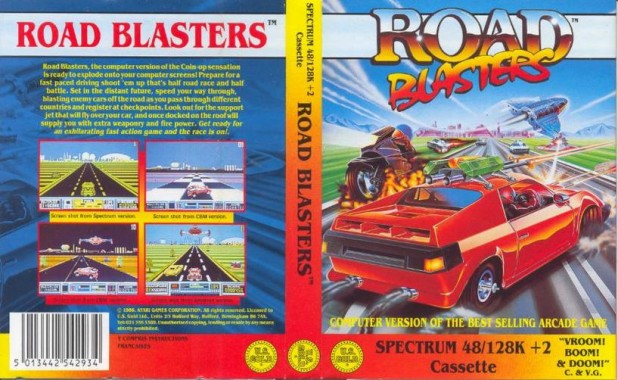 Road Blasters, the computer version of the Coin-op sensation is ready to
explode onto your computer screens! Prepare for a fast paced driving shoot
’em up that’s half road race and half battle. Set in the distant future,
speed your way through, blasting enemy cars off the road as you pass through
different countries and register at checkpoints. Look out for the support
jet that will fly over your car, and once docked on the roof will supply you
with extra weaponry and fire power. Get ready for an exhillarating fast
action game and the race is on! 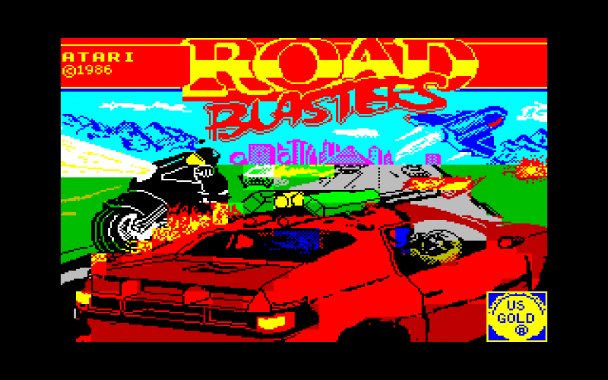 Following the road, you travel through a progression of countries,
alternating checkpoints and rally points. As you race past checkpoints (mid
point goals) you are awarded additional fuel. Rally points are similar to
the finish line in ordinary race games as they indicate the completion of a
race section. A scroll up video display evaluates player performance at each
rally point. The game ends when the player runs out of fuel, by driving too
slow, being destroyed by opponents or crashing too often. 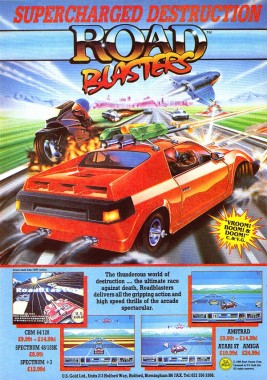 Placed along the roadway are green and red fuel globes for obtaining fuel.
(Due to colour restrictions of the Spectrum the globes will appear as shaded
or clear and the colours change according to the scenery presented on each
level). By tagging these the players cars are refuelled. As a reward, when
you reach each checkpoint and rally point you recieve extra fuel. Four
unique computer-controlled opponent vehicles challenge players. These are:

These vehicles join forces to try to prevent the players from reaching the
next rally point. Scores equal the points scored x multiplier.

In addition the following elements conspire to destroy you:

* Mines – these are placed in the road.
* Gun Turrets are placed on the side of the road and shoot at the players.
* Spikes are thrown by opponent vehicles.
* Toxic Spill – to be avoided as much as possible.

The player can acquire special weapons by docking with the special attribute
pack dropped by the support jet. Special weapons include: Cruise missiles
that destroy everything in the parth of the player, that is visible on the
screen; Nitro Injectors that boost the speed of the player’s car: U.Z.
Cannons that rapid-fire; Electro Shields that protect the player’s car from
shots, collisions, mines and spikers. 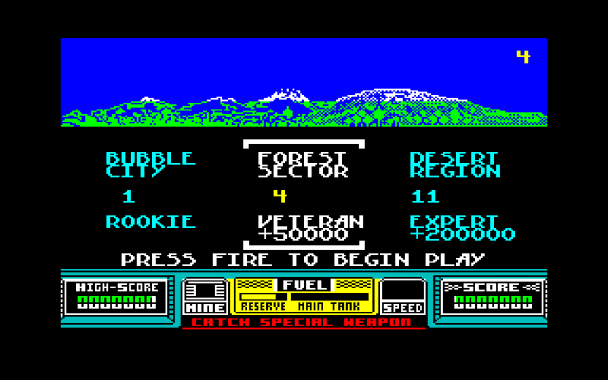 When the game ends, if players are among the top scorers recorded on the
game, they may enter three initials. Players select their initials by
steering to select and firing to enter. Players can correct their initials
by selecting the arrow that points to the left, then repeating the procedure
for entering initials. High scores remain throughout each session.

RALLY STATS
There are 50 stages to be completed in order called Rally Stats.

The Rally Stat block options you are given are as follows:

An expert can complete the game in 26 stages. 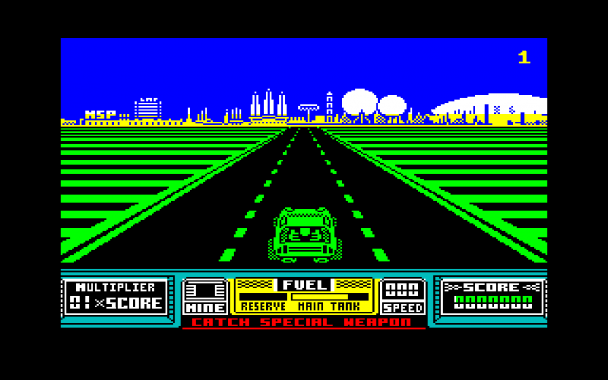 This screen appears after each stage is completed. In the top right hand
corner is the total score up to the end of the last stage. In the top left
hand corner is the highest previous game score. 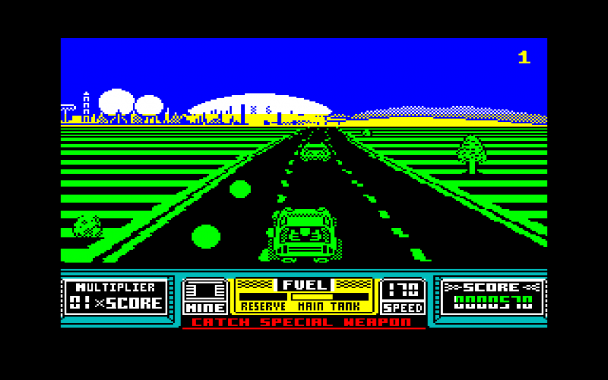 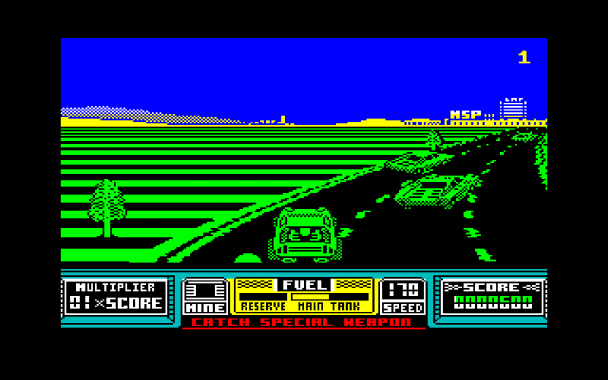 This is by far one of my favourite Arcade games of all time!
I used to go to my local arcade and spend far too much pocket money playing this game.
At my local arcade we had the full sit in version which had car seat and steering wheel
which was so amazing for a young boy.
I was over the moon to hear it was coming out for the ZX Spectrum!
I was really hoping it would play well I obviously knew the graphics would not be like the arcade.
When I first loaded the game in I was wowed by the visuals and the gameplay.\
This game is a cross between a racer and a shooter. The aim is to avoid enemies and gun turrets and by using your own
guns on top of your car and you could pick up upgrades by spaceships flying in.
You also had to make sure you did not run out of fuel so make sure you collected the round fuel cells.
This game played and visually splendid for the Spectrum a great conversion of a classic Arcade hit. 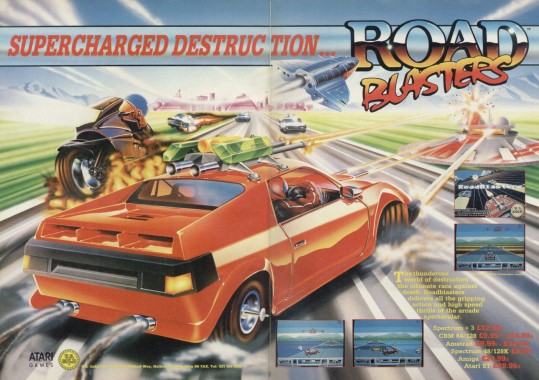