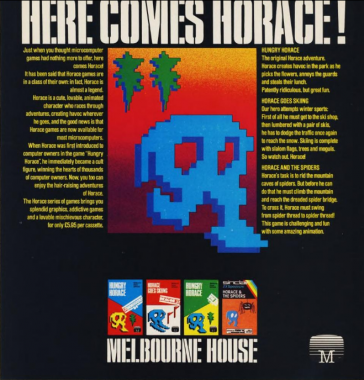 HORACE GOES SKIING is a sequel to the very successful HUNGRY HORACE.

The HORACE series pioneers the idea of inter-active cartoons.

Help Horace to slalom down
the mountain course between the flags and avoiding the trees — but first he
must cross the busy roads to get to the ski slopes. A complex, colourful and
outstanding computer game.

Before Horace can get to the ski-slopes he must fetch his skis from a hut on
the other side of the busy road. Horace will move in one of four directions
according to the keys you press:-

At the beginning of the game Horace has $40 to spend. If he is knocked down it
will cost him $10 in ambulance fees. After Horace has successfully crossed the
road, guide him into the door of the hut where he will fetch his skis. The
charge for ski hire is $10. Horace should not enter the ski hut unless he can
afford the hire charge. If Horace has spent all his money on ambulance fees,
then he can accumulate points and money by crossing the road repeatedly. At
every 1000 points boundary, Horace receives a $10 bonus. Horace should not
l 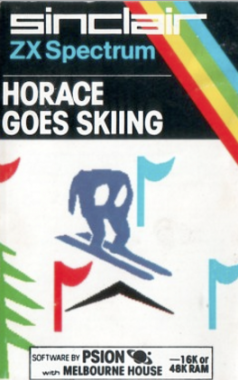 inger on the road longer than necessary since the traffic becomes
progressively more conjested. After fetching his skis Horace must return across
the road to the ski slopes.

In the second part of the game Horace must ski down the Hannekon run avoiding
the trees and slaloming between the red and blue pairs of flags. If Horace
fails to pass between the flags a warning note is sounded and Horace will lose
points.  Horace increases his points by passing between the flags and he
can also receive a 100 points bonus by passing through the finish barrier. As
in the highway section, there is a $10 bonus at every 1000 point boundary. If
Horace should hit a tree then he can continue on the slope provided that his
skis do not break. If his skis do break then Horace must again cross the road
for a new set of skis and then return across the road to the ski slopes. If
Horace successfully completes the course with his skis intact then he must
cross the road once with his skis to the next slope. 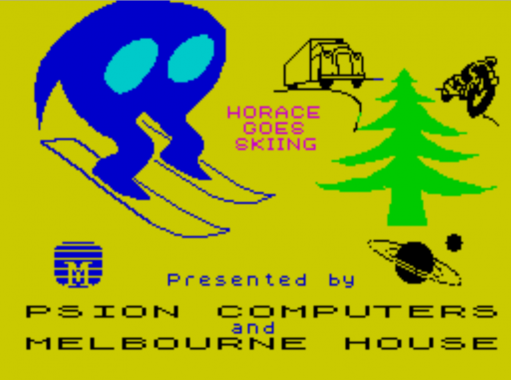 I enjoyed this game for a number of reasons; one of them being a fan of Frogger and also this was one of the quickest loading cassettes I owned being under a minute if I remember right.

This is the second game featuring the character Horace and this game very much a Frogger rip off.

The past of this game you need to cross the road a number of times collecting your ski’s. 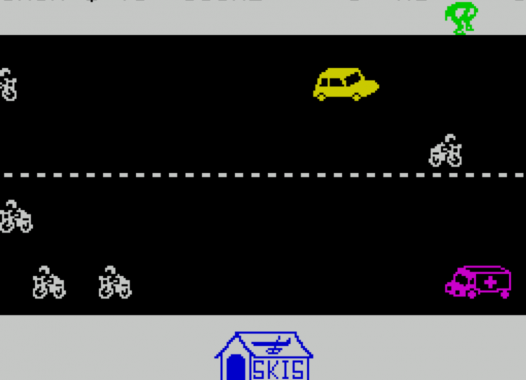 Then its onto the ski slope avoiding trees and moving between the set out flags.

Not much more to say apart from game very enjoyable even though the graphics are very simple. 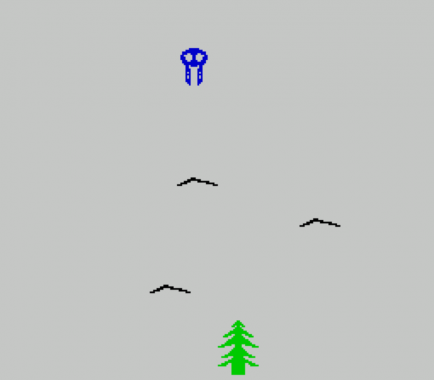