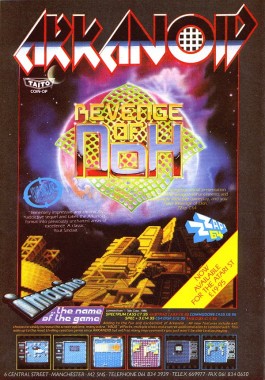 The huge alien spacecraft, ZARG, has entered our universe. It is known
to contain the dimension controlling force DOH, a being believed to
have been destroyed forty thousand years ago in the Arkanoid Spacewars.
Doh has metamorphisised into an even greater adversary and now
threatens the very universe. Only your skill and split second timing
can now save us! Deploy the new Vaus II spacecraft and may fortune
follow you.
Adding to the fun and excitement of ARKANOID. With many extra Vaus
effects and a secret additional alien, this is the most thrilling
reaction game since ARKANOID, with so many improvements you just won’t
be able to stop playing. 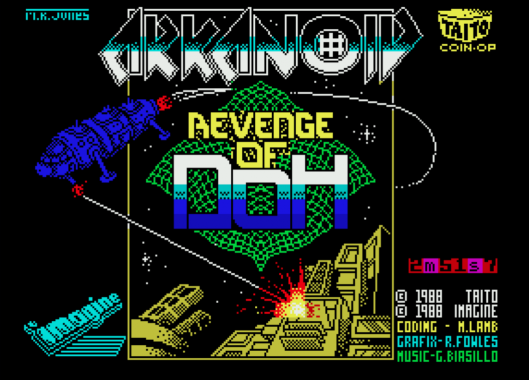 STATUS AND SCORING:
On-screen scoring displays score, hi-score, number of lives remaining
and the level attained.
Points awarded are between 60 and 140 for destroying a brick,
depending on the colour. Hitting aliens scores 100 points and
collecting a capsule gives you 1000 points.
An extra life is awarded at 50,000 points and collecting a ‘P’ capsule.

HOW TO PLAY:
You control the Vaus craft, which can be moved from left to right.
Using your skills, you must deflect an energy bolt which will
gradually break down the wall confronting you. Certain coloured bricks
must be hit more than once and others are completely indestructible.
Alien life forms descend at random to hinder you but are eliminated on
contact with either the Vaus or the energy bolt.

SPECIAL POWERS:
You are aided in your attempts with energy capsules which are hidden
beneath certain bricks. These capsules are released upon the
destruction of the brick. Each capsule has a different power, denoted
by a letter painted on its side. These powers are as follows:
B – Breaks through the side wall, giving the Vaus an alternative
escape route to the next level.
C – Enables you to catch the bolt, move to the desired position and
then fire.
D – Disrupts the bolt into five separate components, thereby giving
you five times the effect.
E – Expands the Vaus, giving you more chance to deflect the energy bolt.
G – Gives the Vaus a ghost, which trails along behind the Vaus but
cannot deflect the energy bolt.
L – Arms your Vaus with a laser, allowing it to shoot through the
bricks and aliens.
M – Breaks the bolt into three separate components, which regenerate
when each one is lost.
P – Awards you an extra life.
R – Reduces your Vaus, making it harder to deflect the energy bolt.
S – Slows down the speed of the energy bolt, making it easier to deflect.
T – This causes a twin of the Vaus to appear. These craft are identical
and give you twice the effect.
Special Capsule – This bestows a random special power on the Vaus. 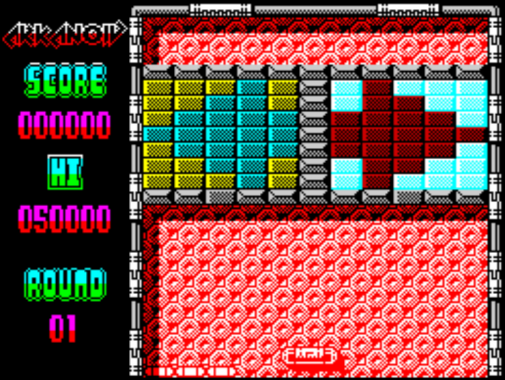 HINTS AND TIPS:
* The disruption capsule is of great use if your energy bolt is
trapped behind a wall.
* The laser is most useful to break down bricks which require a
number of hits.
* Using the very edge of your Vaus to deflect the bolt will give you
a much sharper angle, most useful for manoeuvering into restrictive
places.

I enjoyed a few bat and ball games in my time starting from a form of Pong on some TV plug in system of the early 80’s with the sound coming from the system rather than the TV.

This is my 2nd favourite bat and ball game first being Batty which I am currently working on a feature for the site.

I love the loading screen for this game by Mark R Jones who’s interview is on the site.

The aim of the game is to work your way through many levels destroying the blocks and picking up different power up to assit such as multi balls and larger bats.

For me this is visually better than the original and even pips Batty for visuals.

Highly addictive and visual splender make this a total classic. 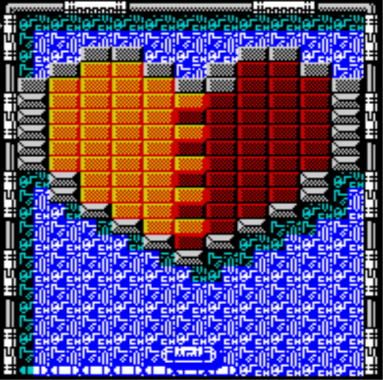 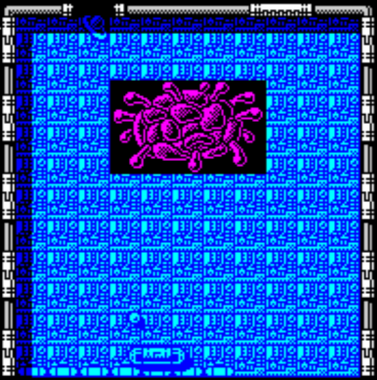 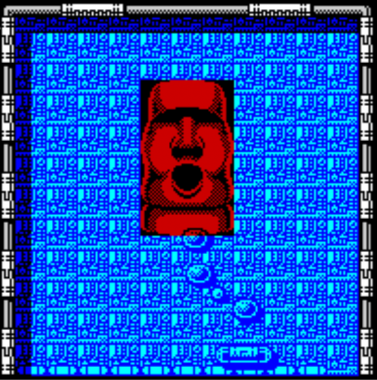