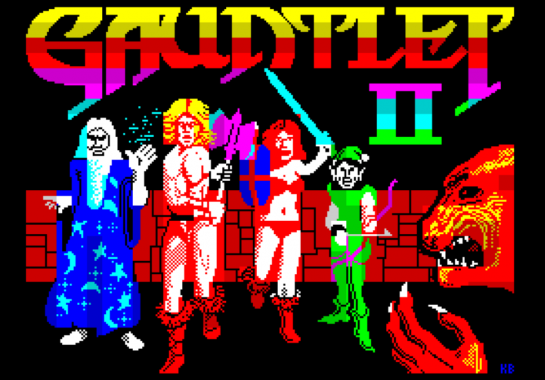 How long you last depends on your health. Health is lost by contact with the
monsters and as time elapses. It can be regained by picking up the food which
can be found in the maze. Be careful, some food can be destroyed by your
shots and some may be poisoned.

The object of the game is to survive the monsters’ attacks for as long as
possible whilst competing for food, treasure and magic potions. You must also
search the maze to find the exit to the next level.

For game controls, details will appear on the screen. 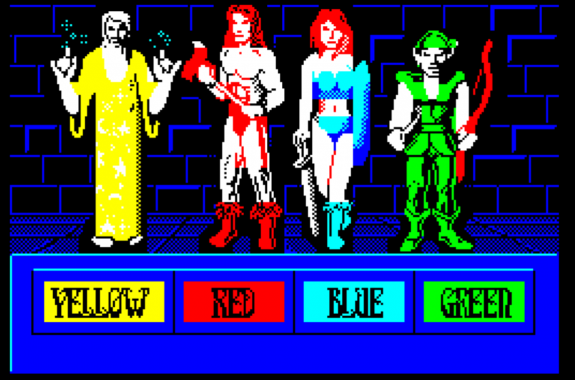 GHOSTS: Stay away from ghosts. They hit you only once and disappear. One hit
hurts a lot. Shoot ghosts, do not run into them!

GRUNTS: Grunts will run up to you and hit you with their clubs over and over.
Either move the joystick towards them to fight them hand-to-hand or shoot
them.

DEMONS: Demons will try to shoot fireballs at you if they can, or if they are
too close they will bite you again and again. Fireballs hurt more than biting
does.
Either move towards them to fight them hand-to-hand or shoot them.

LOBBERS: Lobbers will try to lob rocks over walls and other things in the maze
to hit you. They will also try to run away from you. Try to shoot them or trap
them in a corner and fight them hand-to-hand.

SORCERERS: Sorcerers try to fool you by disappearing while moving. When they
are invisible, your shots will go through them. Either move the joystick towards
them to fight them hand-to-hand or shoot them.

DEATH: Death will drain health from you. He will take up to 200 points and
then die. The only way to kill Death is with magic. Don’t even think about
fighting him hand-to-hand!

SUPER SORCERERS: This sorcerer appears, takes a shot at the player and then
disappears again. He continues to do this until shot by a player. Magic only
stuns him and prevents him from shooting or disappearing immediately.

ACID PUDDLES: These green pools hurt the player but do not attack him: instead
they wander around aimlessly. They cannot be shot. Magic only stuns them.

The ‘IT’ Monster: This creature, which looks like a glowing, spinning disc,
disappears when it hits a player. That player then becomes ‘IT’. All monsters
are attracted to the player who becomes ‘IT’ until he or she leaves the maze
or until this player touches another player who then becomes ‘IT’. This
monster cannot be shot but can be stunned by magic.

The ‘THAT’ Monster: This creature, which looks like the ‘IT’ monster, chases
players around the dungeon. If it touches a player he loses a special power
or a potion or 100 health points.

Around the dungeons are objects to collect and avoid:

POTIONS: Some potions can be shot although their effect is less powerful than
when they collected and used.

FOOD: Plates of meat increase health by 100 and give a bonus of 100 score
points.

CIDER: Cider bottles can be shot and destroyed. When drunk this acts like food.

POISONED CIDER: This can be shot and will slow monsters down for a short time.
If drunk, poisoned cider takes 50 health points and makes the character dizzy
and difficult to control.

KEYS: Score 100 points for collecting. Use keys to open doors.

TREASURE: Treasure chests cannot be shot but give 100 points when collected.
Some treasure chests are locked and need to be opened with a key. They may
contain food, money, a potion or even Death!

AMULETS: These magic devices confer special abilities on the wearer for a
short time.

INVISIBILITY: Monsters cannot see you and wander around.

INVULNERABILITY: Monsters cannot hurt you, but your health decrements twice as
fast as normal.

REPULSIVENESS: Monsters cannot stand you and run away.

TRANSPORTABILITY: The player can now pass through any solid object by running
into it.

10 SUPER SHOTS: These shots kill all monsters in their path and keep
travelling until they hit a wall.

REFLECTIVE SHOTS: These shots bounce off walls allowing players to shoot
around corners. They bounce a maximum of three times.

WALLS: In general walls are impenetrable objects, but some walls crumble when
shot.

TRAPS: These glowing patterns on the floor make some walls disappear when
stepped on. There can be more than one trap. Trap walls may be invisible.

STUN TILES: These tiles stun any player who treads on them and then disappear.

TRANSPORTERS: Glowing red discs on the floor, transport players to the nearest
visible transporter. If several transporters are the same distance away, then
one is chosen at random. There are ways to influence your direction. Can you
find them?

FORCE FIELDS: These go on and off in a particular pattern. If a player enters
a field when it is on his health will quickly drain. Monsters are not
affected. Force fields cannot be destroyed.

EXITS: These labelled holes lead down to the next level or to the level
specified. Some exits are phoney. They are only painted floor tiles. On some
levels exits move around by closing and re-opening elsewhere.

Treasure rooms appear randomly and the player has a fixed time to collect as
many valuables as possible within a time limit, which is displayed at the top of
the screen. There is no score unless the player escapes.

In general players are immune to the other player’s shots but in some areas of
the dungeon, missiles can stun or injure fellow players.

If players do not fight for about half a minute, the locked doors will
disappear, freeing all of the monsters. Eventually, if players still avoid
combat then all of the walls turn into exits! 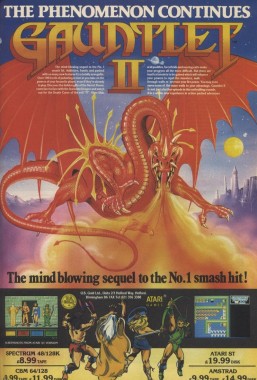 Another game I was lucky to own on +3 disk.

I used to spend many hours playing this game on multi player with my sister.

The aim of the game is to battle through dungeons finding the exit on each level.

You have a choice of four characters a Warrior, Wizard, Elf and Valkyrie.

The mazes are well designed and many traps and different enemies stand in your way such as Death, Ghosts and Demons.

Make sure you destroy the bases as the enemies will respawn.

Within many levels you can find many warps and sometimes more than one exit skipping levels.

You have to collect keys and be selective which doors you open as you find your way out of the mazes.

I spent far too many hours on this game and never seemed to end but a very addictive and challenging game. 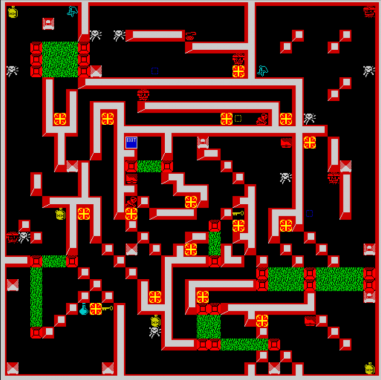 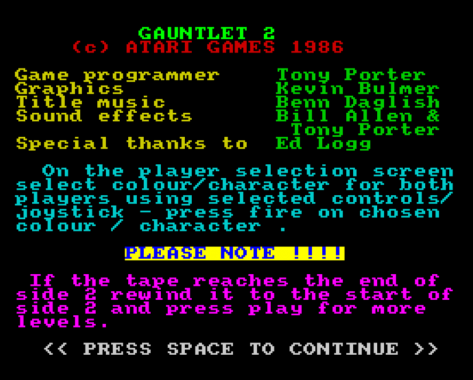