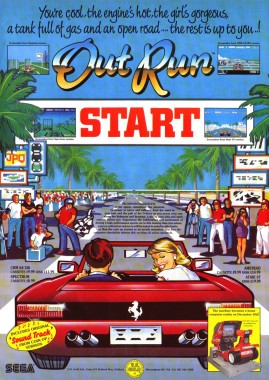 The ultimate experience in motor sports simulation, the absolute challenge
to nerves and reflexes. Feel the wind in your hair and the pull of the
G-force as you power your way along the highways and byeways, a girl by
your side and open country before you. Experience the exhilaration and
excitement of driving a high performance sports car in this teasing time
trial where your co-ordination and nerve will be tested to unbelievable
limits. Out Run the coin op starred as an arcade sensation. Out Run the
computer simulation mirrors this exciting all action spectacle.

Taking nine months for numerous programmers to develop the graphic design
and gameplay, OUT RUN must surely be one of the greatest, if not the
greatest, home computer arcade version of all time. The computer game
reproduces as faithfully as possible all of the exciting elements of the OUT
RUN arcade machine. If it was more realistic you would need a driving
license to play. To add to the authenticity, an audio soundtrack from the
arcade game is included for use on your Hi-Fi to recreate that true arcade
excitement.

SEGA(R) have sold 20,000 video arcade machines worldwide making it the
largest selling dedicated arcade game ever. It is the 5th mobile game
developed by SEGA(R) and is certainly the most successful to date.
Although it is no longer in production OUT RUN has now become a much sought
after addition for those arcade owners who didn’t purchase the machine when
it was originally available. Easily an arcade classic among the elite. 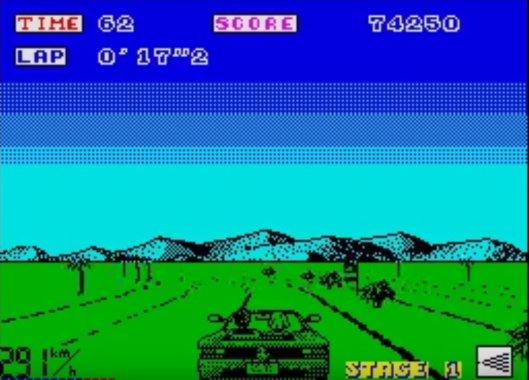 Like no other game before it, you try a race against time to achieve your
objective of reaching any one of five goal lines and become a winner. The
course you will take is up to you. Start your engine, grip the controls and
participate in the fastest race ever. Be prepared to dip, curve and increase
your speed as you drive the arduous course. Familiarise yourself with the
controls and GET READY!

Use your skill and judgement on this hand to eye masterpiece to manoeuvre
your way past the many obstacles placed in your path. Avoid collisions and
try to stay on the road. 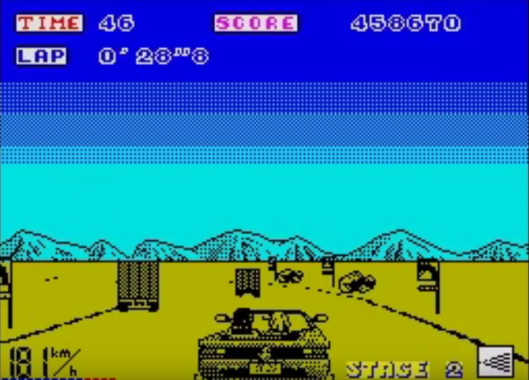 Use of gears: These will help you accelerate, decelerate and manoeuvre
through the curves. Use a low gear to start with until you have gained speed
and then open it up for tremendous acceleration. Keep in a low gear when
tackling a curve to hold the road and shift into high gear for maximum
acceleration on the open straight.

Screen directions:
Score: As you drive through each scene, points will be gained for driving
well. As you will observe your points add up instantaneously.

Time: Each race scene needs to be completed within a specific time. The
time will count down as soon as you start the race.

Speed: Your cars’ speed will be displayed in kilometers per hour.

Time Limits: You’ll be disqualified if you fail to complete the respective
scene within the designated time limit and you will have to restart. The
time limit will vary but will always be displayed under TIME on the screen. 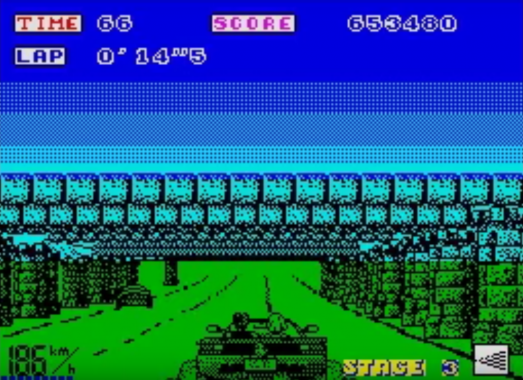 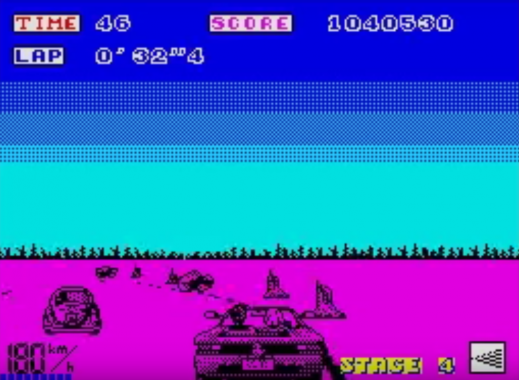 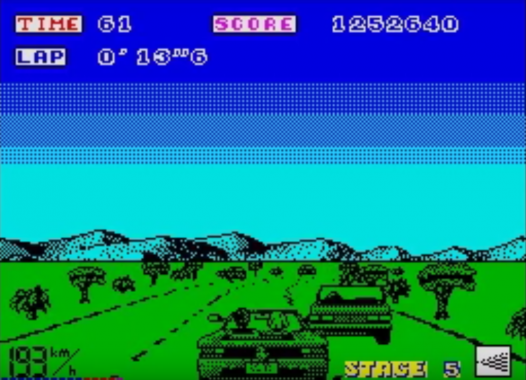 Yet another game I spent too much of my pocket money on in the Arcades!

I loved to play the sit in version of this classic racer.

To my delight this game was being released for the spectrum and on +3 disk!

Many of the home versions had a red car sprite but in my opinion the detailed textured version although green and black looked better!

The aim of the game is to speed your way through the many challenging levels choosing multiple routes at the end of each level giving a lot of replay value. 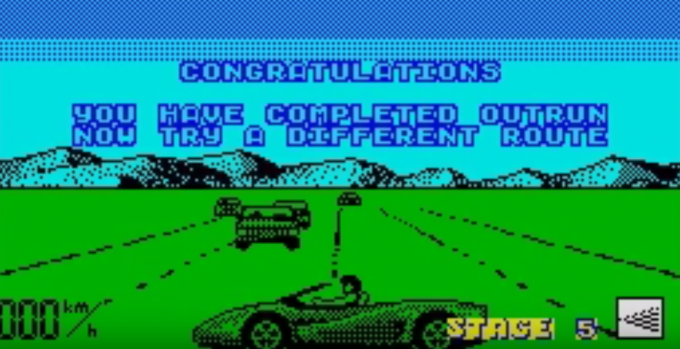 I enjoyed the soundtrack although the original arcade soundtrack was included on a cassette.

I could not tell you how addictive the game is with its great graphics and smooth controls.