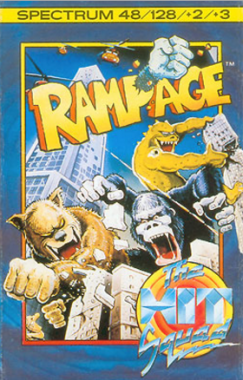 It seemed like any other day at the Greaseburger Fast Food Emporium — but three unlucky customers were to get something even nastier than usual in their Big Mucks. If only the company’s Research Division hadn’t accidentally shipped some of the experimental food additives… A wave of nausea, a foul aftertaste, chronic indigestion: everything was normal until George, Lizzie and Ralph ripped out of their clothing and into designer fur and scales. Life isn’t fun as a fifty-foot gorilla, Lizard or Wolfman — and soon everyone’s going to find out how angry they are!
Up to three people can play, each controlling a different monster. In a desperate battle for survival, you climb the skyscrapers and smash the walls with your fists, searching for edibles — anything from goldfish bowls to the occasional tasty human — that appear behind the shattered windows. Grabbing inedibles such as toasters, TV’s and potted cacti will inflict some damage on you, though. Each player’s stamina is indicated by the energy bars at the top of the screen.
Damaged buildings will eventually collapse into rubble, but leap off when the foundations start to give way — getting trapped in the falling masonry will weaken you. The nation’s military might is also bent on your destruction, so try to avoid (or punch) the troops who fire from the windows, and the gunship helicopters that are constantly circling overhead. You can also punch — and be punched by ­ your fellow monsters.
If you lose all your energy, you revert back to human form and, hiding your nakedness as best you can, shuffle off-screen in embarrassment.

I remember buying this game at my local Newsagents with some pocket money on a Saturday morning when I was at a loose end.
I enjoyed watching some of the B movie Japanese Monster movies so thought I would give this ago it looked like fun!
What a great choice price, visuals, playability and addictive a perfect mix!
You can choose from 1 or 2 players and one  of the Monsters George, Lizzie or Ralph.
The aim of the game was simple go on a Rampage destroying everything in your path from tanks, helicopters, eating people.
But the biggest objective was to destroy the many buildings which is how you completed a level by smashing down buildings.
But it is not that simple as you have the army trying to stop you by shooting you with weapons, tanks and helicopters.
I would say this is better than the sequels that were made and if you have never played this then do it!!! 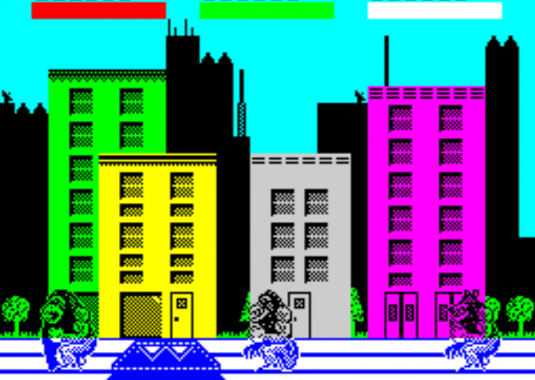 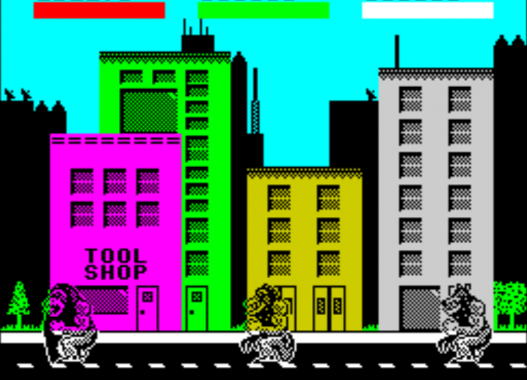