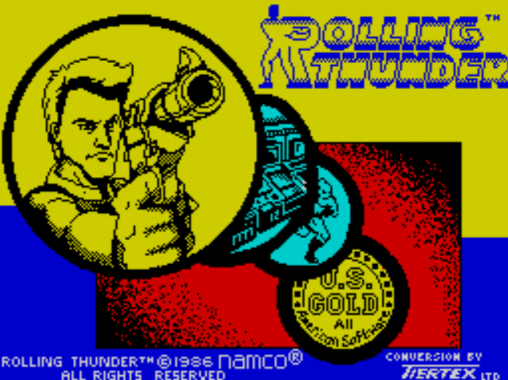 In New York City around the year 1960, the elusive Maboo is plotting to
conquer the world.
Rolling Thunder, the undercover arm of the WCPO (World Crime Police
Organisation) has sent the female secret agent Leila on a special assignment
into Geldro’s underground headquarters. Her mission was to expose the treach-
erous conspiracy, but she was captured.
WCPO sends in the only man on the Rolling Thunder force who can possibly
rescue Leila. He is known only by his reputation and code name ‘Albatross’.
Guns are blazing and the fighting begins. 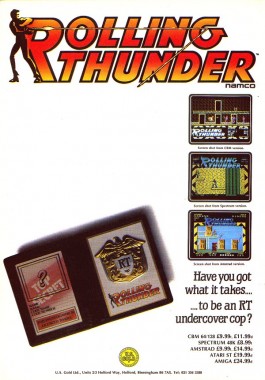 GAME PLAY:
You assume the role of ‘Albatross’ and your prime objective is to penetrate
and overthrow the secret organisation ‘Geldra’ controlled by the sinister
Maboo.
To achieve your objective you must pass through ten levels, jumping over
balconies and over obstructions in your path. Enter doors to hide from guards
at strategic moments. The guards that you encounter along the way will shoot,
punch and drop bombs on you, mercilessly draining your energy. You are armed
with a pistol and machine gun with which to defend yourself. By entering doors
marked with the bullet (pistol ammunition) or gun (machine guns ammunition)
symbol you can gain extra fire power.
Hazards you will encounter along the way include deadly automatic lasers and
storming fire men who inhabit the lava-pool.
If you manage to defeat Geldra’s army and capture the command centre you
must confront Maboo in the final showdown.
You will be fighting against time whilst preserving your life.

I remember playing this in my local arcade back in the 80’s and was addicted by the playability and visuals of this side scrolling shooter/platformer.

I was so happy to see it was being released for the ZX Spectrum.

The home version played as well as the arcade version and the visuals are crisp and colours used work well with the game.

You play as a character called Albatross and you aim is to defeat the secret organisation Geldra and ultimately defeat the leader Maboo.

The game is a platform/shooter and you do not have unlimited ammo on the game you have doors you can go into to upgrade and refill ammo.

You move along the screen avoiding bullets and jumping up and down platforms the difficulty level of this game is very challenging and you can afford one hit and on second that’s it you lose you life and get sent back a fair distance.

After some practice you will progress and it is worth while and an enjoyable experience.