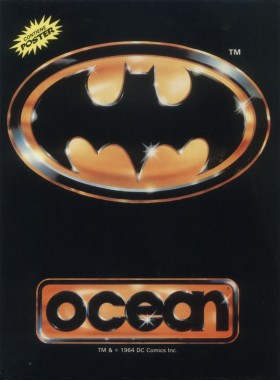 Overview:
BATMAN is a shadow in the darkness, as elusive as a dream. High above the
seamy streets of GOTHAM, he is a criminal’s nightmare. The only hope for a
desperate city…

BATMAN – A LEGEND HAS RETURNED:
BRUCE WAYNE. The multi-millionairre head of the Wayne Foundation is an
unassuming, quiet type of guy. However, when night falls and evil stalks the
streets, he sheds his daytime persona and becomes the masked vigilante of
GOTHAM CITY – BATMAN!

Crusading against crime from the rooftops of the sickened city, his objective
becomes the elimination of Gus Grissom’s criminal empire: in particular, the
conquest of JACK NAPIER, the psychotic second-in-command.
Napier was the most cunning and sadistic force in Gotham anyway, but when
an accident befell him, twisting him both physically and mentally, he became
the ultimate criminal – THE JOKER!
You control the CAPED CRUSADER in five different scenarios as he is pitted
against his malevolent nemesis in the life or death struggles that ensue.
THE ULTIMATE MOVIE INSPIRES THE ULTIMATE GAME…PLAY BATMAN.
GAMEPLAY: 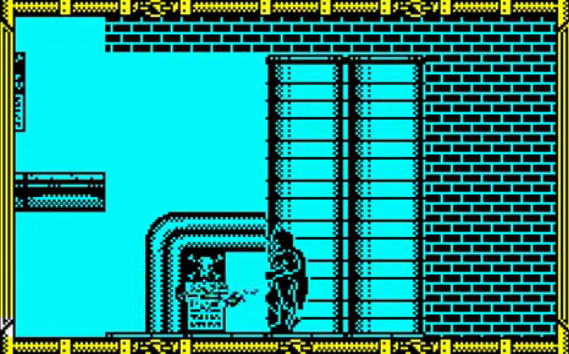 Section 1 – Axis Chemical Plant
As BRUCE WAYNE you overhear Commissioner Gordon telling the Mayor of an
attack on the Axis Chemical Plant by JACK NAPIER and his henchmen. Acting
swiftly, you don your black costume and make your way to the scene. Once
inside the factory, you must move towards the exit (and Napier) on the far
right of the map. You will meet assorted criminals along the way, some of
whom will attack you physically, some will shoot at you and some will throw
grenades. Avoid, also, leaking chemical droplets and gas bursts at various
points on your route.
You can sustain a limited amount of hits as your body armour affords a
certain degree of protection, but your energy can get depleted quite rapidly
if you do not try to defend yourself.
Use the BATARANG to throw at your attackers, and your ‘batrope’ to access
levels above, by shooting a grapnel device from your belt and reeling
yourself up.
On the final screen of this level, you will confront Napier himself. If you
defeat him, he will fall into a vat of toxic chemical waste which will
disfigure his appearance and mind. You have created the Joker! 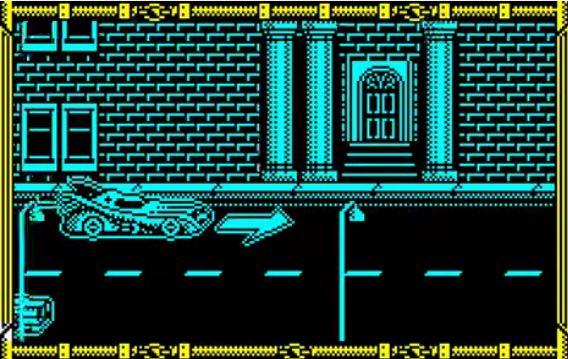 Section 2 – The Streets of GOTHAM CITY
Having rescues Vicky Vale from the clutches of THE JOKER in the Flugelheim
Museum, you must make good your escape in the BATMOBILE.
Racing at high speed through the streets of GOTHAM CITY, you must avoid both
THE JOKER’S vehicles and the police who have set up road blocks, as they are
still unsure which side of the law you are on.
Your BATMOBILE is equipped with a sophisticated radar which will indicate the
direction you must follow in order to escape safely. If you do not maintain a
high speed THE JOKER will catch you up and inflict damage upon the BATMOBILE
as will any collisions with other cars.
The BATMOBILE is also equipped with a rope and grapnel. If, whilst travelling
at high speeds, you wish to make a fast turn, shoot the grapnel out at a
lamppost on the street corner: if timed correctly, this will enable you to
make the turn without speed loss. 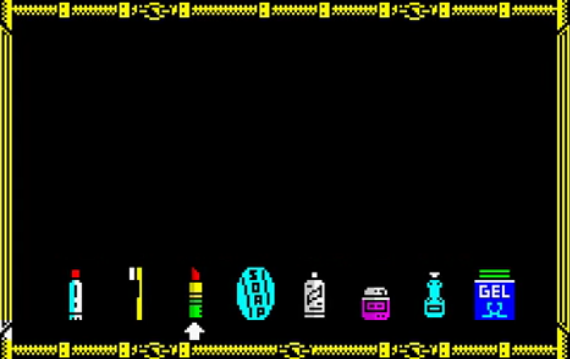 Section 3 – The BATCAVE
The JOKER has invented a compound “Smilex” which, on contact, will kill its
victims, leaving a deathly rictus grin on their faces. The JOKER has ‘spiked’
certain everyday consumables with elements from this compound which, when
mixed together, forms Smilex.
Using the powerful computer in your BATCAVE, you must, in the time given,
ascertain which three objects contain those elements. As you select any
three, the display will indicate how many of those you have chosen correctly.
You must, by process of elimination select the exact trio of elements before
the time runs out. 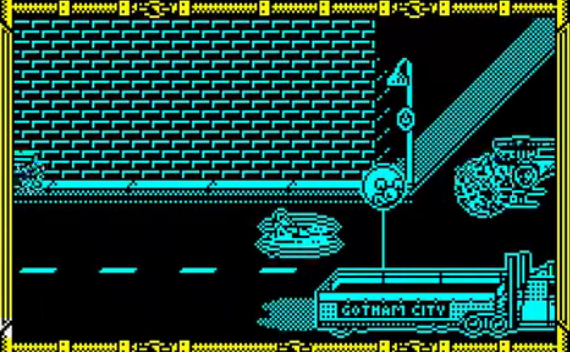 Section 4 – The Streets of GOTHAM CITY
THE JOKER’S deadliest scheme is now taking place at midnight on the Streets
of GOTHAM CITY. By promising massive handouts of money to the people of
Gotham, the streets are packed with masses of unsuspecting citizens.
However, all is not as it seems, for the carnival-type parade contains a
sinister secret.
Inside the dozens of bright balloons is enough Smilex gas to kill the entire
population of GOTHAM CITY. These balloons are about to be leaked…
You are piloting the BATWING and must cut through the mooring ropes of the
balloons with the wings of the flying craft. If you miss any of them, they
will self-destruct, sending clouds of gas into the crowd, similarly if you
miss the rope and hit the balloon itself, the same will occur. If, however,
you slice the rope, the balloon will float harmlessly away where the gas
will dissipate into the atmosphere.
Eventually, as THE JOKER learns of your interference, he will send some of
his helicopters in to thwart you. Avoid these at all costs. 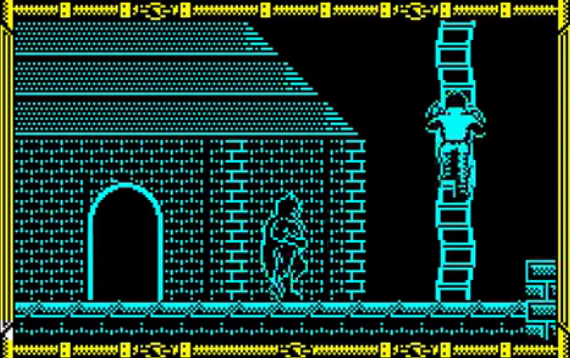 Section 5 – The Cathedral
Pursuing THE JOKER to Gotham Cathedral, you must negotiate the crumbling
floors and avoid the rabid rats in order to confront, finally, THE JOKER on
the roof. As in the Chemical Factory, you must use your BATARANG and
‘Batrope’ to achieve this aim.
On the rooftop, you must defeat THE JOKER, or he will make his escape by
helicopter and bring GOTHAM CITY to its knees. 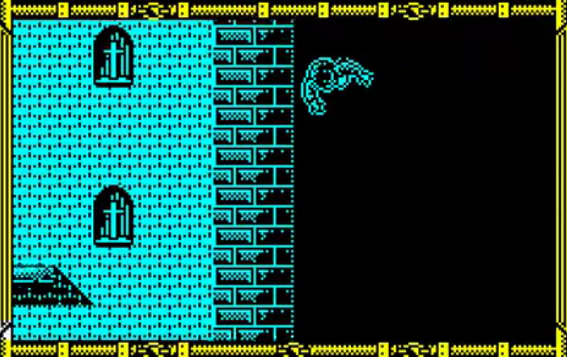 LEVELS 1 AND 5
Master control of the ‘batrope’. Work out a quick route to the end. Shoot on
sight.

LEVEL 2
Don’t bump into other cars. Be as quick as possible. When the arrow indicates
a turn is ahead try and move to the side of the road.

LEVEL 3
Use your brain. Be quick (you’ve only got one minute). 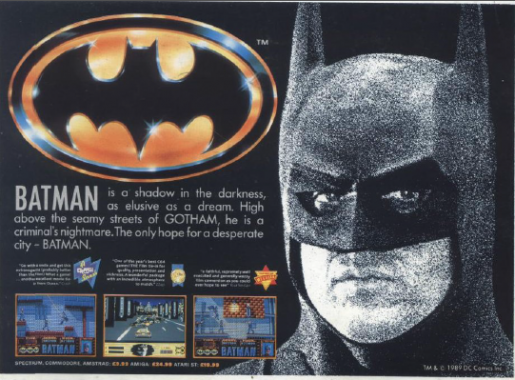 THE REVIEW:
I still have fond memories going to see this movie directed by Tim Burton when I was 13 years old and for me was one of the best movies id seen on the big screen at the time. The amazing score by Danny Elfman and fresh music through the movie by Prince. The surprisingly good acting of Michael Keaton playing Bruce Wayne/Batman and the outstanding performance of Jack Nicholson as Jack Napier/The Joker.  After watching this I had Batman fever!!!
So was so happy a game was being released and the question will it love up to the amazing movie?
The answer is HELL YES!!! From playing level 1 The Axis Chemical plant which for me played very much like Robocop which was a good thing but to have a grappling Batarang to swing into enemies to reach high platform  took this game to another level above Robocop which I never thought id ever say!
The levels played in same order as the movie and making you feel that you was Batman.
Going back to talking about Level 1 Axis Chemical plant were you have to fight your way through Jack Napiers henchmen armed with your trusty Batarang which was a weapon and grappling hook. At the end of the level as in the movie you shoot Jack into Toxic waste (Smilex)which made him have the famous smile and turn into the twisted foe of Batman the Joker.
Onto Level 2 driving the Batmobile around Gotham City finding your way to the Bat Cave avoiding obstacles on your way to quickly find the compounds of Smilex which you do on the Bat Cave computer in level 3 of the game.
Flying on to level 4 (Pardon the bad joke) you fly the Batwing trying to collect the big festival party balloons containing Smilex before they infect everyone in Gotham.
And as in the Movie the final level is the The Cathedral where you need to fight your way to the top to capture the Joker and eventually make him plunge to his death.
In summery this game has a great variety from platform, high speed car level, Flying level to puzzle.
Shame the music was not the original score but the by Matthew Cannon works well in keeping the high octane game going.
If you have not played this go do it NOW!!!!