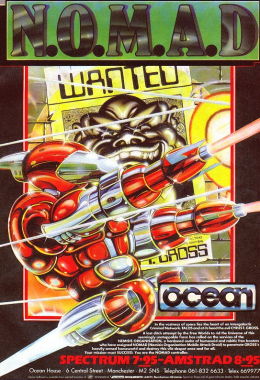 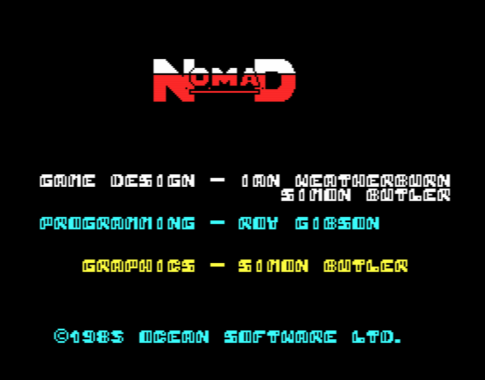 I do not usually have time to do any reviews as busy with interviews and the back end of site but the Spectrum has been neglected far too long from any reviews.
I am going to review N.O.M.A.D on the Spectrum. I was lucky to get a Spectrum +3 for Christmas from my parents and it came with 2 Disks with games on it which loaded very quickly which was a luxury back then. But later on I did get tape deck as my pocket money did not stretch to too many disks. 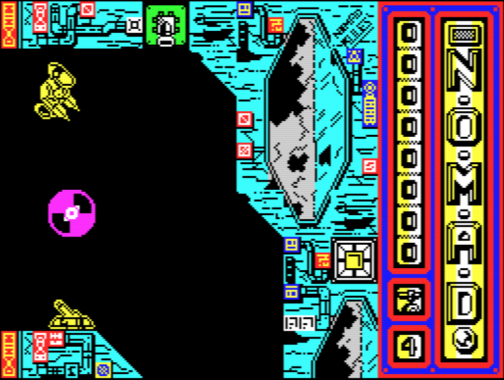 One of the games included was N.O.M.A.D here is a bit about the game:
Out in the vastness of space lies the heart of an Intergalactic
Criminal Network, TALOS, a man-made asteroid slowly spinning through
the void, spreading its evil through the Universe. At the head of this
seemingly unstoppable force sits one man, the unspeakably vile Cyrus
T.Gross.
A name spoken only in whispered voices, Gross is the embodiment of
all that is criminal. Avoiding any attempt to curtail his ever
spreading empire, he has crushed all opposition and seems invincible,
ruling his depraved Zealots with a fist of iron and a heart of ice.
In a last ditch attempt, the rulers of the Free Worlds have called
in the Nemesis organisation, a hardened cadre of humanoid and robotic
freebooters who have assigned N.O.M.A.D. 471 (Nemesis Organisation
Mobile Attack Droid) to penetrate Gross’s heavily armed homeworld and
destroy this vile despot once and for all.
Your mission is to guide N.O.M.A.D. through the four sections of
Capital City towards Gross’s inner sanctum. 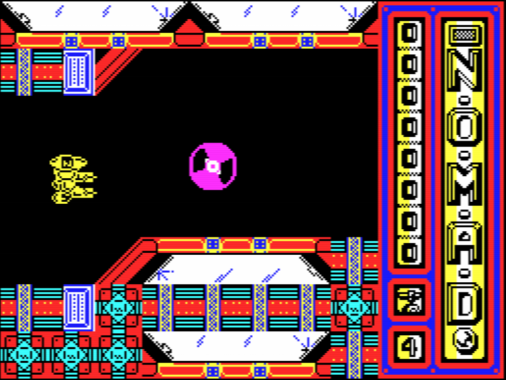 You arrive at the spaceport and must then progress through the
slums, into the city centre and penetrate the HQ; “Dun Dentin’, before
you reach his personal quarters for the final deadly confrontation.
Many dangers await you in all sections of Capital City. In true
cowardly style, Gross has installed magnotrons, heat-seeking missiles,
and an infinity of equally deadly obstacles, all of which must be
confronted and conquered.

N.O.M.A.D. 471 Specifications
“””””””””””””””””””””””””””””
Autonomous war-droid with high-intelligence, Infra-red visual
receptors and high-frequency audio-receivers.
Fitted with anti-gravity pods and twin thrusters functional in both
forward and backward directions and capable of great speeds with a
high degree of manoeuvrability.

Armament
“”””””””
Titanium body shell … Not totally impregnable. Two magnum 57 calibre
blasters. The N.O.M.A.D. 471 series is as yet untested. This is his
first and possibly deadliest mission. The chances of survival are
slim …
The freedom of the Universe is in your hands.
We salute you!

The Review
What can I say this game came out in 1986 and the visuals were ahead of its time.
The N.O.M.A.D. was very well drawn in pixels and the movement look nice and fluid.
The level designs were challenging and colourful which appealed to me.
I am trying to a way to describe this game it’s a shoot em up / puzzler I can’t not think of another game like it.
The controlling takes a bit of practice as you rotate the hoover in direction you need to go but after a bit of patience you will enjoy this challenging game.
During the game you need to search for switches to open certain doors avoid guns, guided missiles and robots.
I sadly never completed the game please let me know if you ever did.