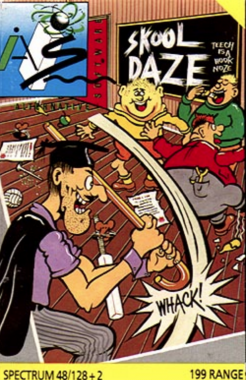 In the role of our hero, Eric (or any other name
you decide to call him and the rest of the cast),
you know that inside the staffroom safe are kept
the school reports. And, being Eric, you realise
that you must at all costs remove your report
before it comes to the attention of the
Headmaster.

The combination to the safe consists of four
letters, each master knowing one letter and the
Headmaster’s letter always coming first. To get
hold of the combination, you first have to hit all
the shields hanging on the school walls. Trouble
is, this isn’t as easy as it looks. Some of them can
be hit by jumping up. Others are more difficult.
You could try and hit a shield by bouncing a pellet
off a master’s head whilst he is sitting on the
ground. Or, being Eric, you may decide to knock
over one of the boys and, whilst he’s flattened,
clamber up on him so that you can jump higher.

OK. So all the shields are flashing wildly,
disorientating the poor masters. Knock them over
now and, before they can stop themselves, they’ll
reveal their letter of the code. All except for the
history master, of course, who because of his
great age and poor eyesight can’t be trusted to
remember. His letter has been implanted into his
mind hypnotically. To make him reveal it, you must
find out the year he was born (which, in case
you were wondering, changes each game). Then,
creep into a room before he gets there and, if the
board is clean, write it on the blackboard. When
he goes into that room and sees his birthdate he
will, as if by post-hypnotic suggestion, give away
his letter.

Now that you know all the letters of the
combination, all you have to do is work out which
order they go in. You know that the Headmaster’s
letter is always first, but as for the other three…
you’ll just have to try the various possibilities. Find
a clean blackboard and write out a combination.

Rush back to the staffroom and jump up to
reach the safe with your hand. If nothing happens,
then the combination must be wrong, so you’d
better find another clean blackboard and try a
different one.

With the safe open, your troubles still aren’t
over, as the flashing shields are rather a giveaway.
To stop them flashing, you now have to hit all of
them again.

Done it? Congratulations! You are now allowed,
along with all your friends, to move on to the next
class at school. But remember, there will be
reports at the end of this term….. 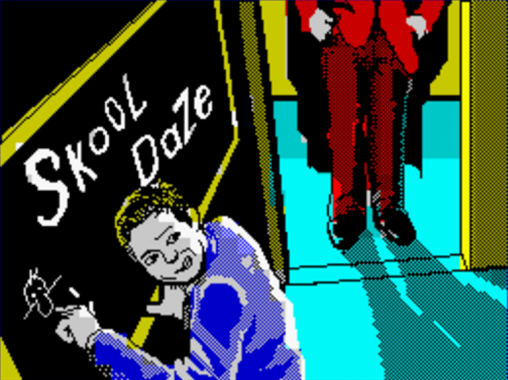 SCHOOL RULES
Boys shall attend lessons as shown in the time-
table at the bottom of the screen. (Remember that
because you cheated in the exams last year, you
always go to the same lessons as the swot.)

Boys do not score points by attending lessons,
but may be given lines if caught in the wrong
place.

Boys who acquire over 10,000 lines shall be
expelled immediately from the school.

Boys are not allowed to enter the staffroom or
the Headmaster’s study. Take care.

At playtime, boys are supposed to be playing
and not in any of the classrooms.

Boys shall not hit their schoolmates.

Boys shall not fire catapults.

Boys are expected to walk quietly in the
corridors – they are not for running or sitting in.

Boys will be neat and polite at all times.

The bell rings and you find yourself working your way around the school, beating up and sling shotting the other kids as you try to hit the shields dotted around the different lesson rooms. After this task (and it is a difficult one!) you have to knock over each teacher who reveals a password letter. Once decoded you have to write it on the chalk board for the old coffin dodging history teacher to see – who then has a mental breakdown giving you the code for the safe! Job done! Well until you have to hit all the shields again.

Only it sounds easy… The school swot Einstein is always grassing you up for smacking him about, if not always stealing your seat in class. Get hit by a stray pellet from boy wonders’ slingshot getting caught by the teacher lying on the ground and the warning ‘noise’ flares giving you instant lines. 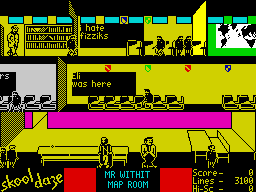 Angel face – the school bully ocasionally gets the mumps – if you cross him consider yourself buggered – instant expulsion! sounds harsh but hey the game would be too simple!

It is always great fun writing on the blackboard before class, something crude which only you will chuckle at.. but hey that’s what school was all about, when we were allowed to have fun.

The game is packed full of fun gameplay, the graphics do look like a straight speccy port – which it is so fair is fair. The only control issue is navigating the stairs and then getting lines for not being in the right place due to said stairs.. If only schools had disabled stair lifts in them there days… then we could get drunk in them.